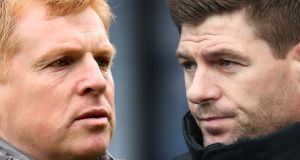 Neil Lennon said Celtic will revel in any playing-down of their chances in the first Old Firm match of the season, after a fraught build-up caused by the international break.

Odsonne Édouard, Celtic’s leading striker, arrived back in Glasgow on Friday after testing positive for Covid-19 more than a week ago with France’s Under-21s. Nir Bitton and Hatem Abd Elhamed will miss Rangers’ visit after they returned positive tests in the Israel camp. Ryan Christie has also been absent from the training ground, having been identified as a close contact of Stuart Armstrong, the Southampton midfielder who was confirmed as positive for coronavirus with Scotland.

Rangers appear unaffected by Covid matters. Bookmakers are finding it tough to separate the chances of the teams, despite Celtic’s domestic dominance.

“We just carry on as normal,” Lennon said. “Our preparations have been good, as best as we possibly could get them under the circumstances. We only got everyone back as a group today on Friday. I take no notice of what people will predict or what they think the outcome will be, because it doesn’t really matter. They don’t know what is going on or how we’ve prepared for the game. I’m delighted if they want to write us off – they’ve done that many times before.”

Celtic face their oldest foes a point adrift at the top of the Scottish Premiership with a game in hand.

“I think it gives you a psychological lift if you can win the first one, but I don’t think it will have a major bearing on the outcome of the season,” the Celtic manager said. “It’s too early for that. We heard all that chat at the end of December [after Rangers won at Celtic Park] that we were finished. We came out all guns blazing in the second half of the season.

“What I am pleased with is our consistency, the win ratio, the clean sheets. I think there’s more to come from the team and more to come from individuals as well as we go along. It’s been quite a stop-start this season in terms of games being cancelled and international breaks. So it’s been difficult to get any sort of momentum going. But we’ve negotiated those circumstances very well of late.”

Lennon, so immersed in this fixture, admits it will be very odd without spectators. “Once the kick-off comes, your focus is on the game itself, just as it always is. Yes, there will be part of me which thinks: ‘God, this just doesn’t feel right.’ But you have to get past that very quickly. It’s certainly not ideal and it does take away the home advantage, there’s no question about that.

“I still believe that spectators could and should be coming to the matches but that’s the government’s decision to make, not mine.”

Steven Gerrard has shrugged off any notion that international matches provide needless risk in the middle of a pandemic. “Assuming that players can be safe, I want international football to continue,” the Rangers manager said.

“We know it’s not perfect, but two weeks ago we had a fantastic highlight qualifying for the Europa League against Galatasaray, so I can’t sit here and say European and international football should be cancelled because it might suit my Rangers team.”

1 Ireland, France or England? Who needs what to win the 2020 Six Nations
2 ‘This is not a personality contest’ - Jack Nicklaus endorses Donald Trump
3 America at Large: Golfers guilty of legitimising Trump’s toxic regime
4 Solskjær’s stock is on the rise again after clever squad rotation
5 Football 2020: It’s a knockout revisited – ‘You played, you lost, you went home’
Real news has value SUBSCRIBE
Crossword Get access to over 6,000 interactive crosswords