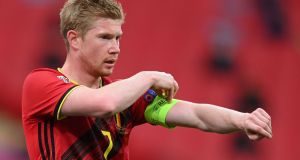 Kevin De Bruyne will miss Manchester City’s “next games” because of a muscle problem, according to Pep Guardiola, though the manager does have Sergio Agüero back in full training.

De Bruyne withdrew from Belgium’s squad this week, having been substituted in the 2-1 defeat by England at Wembley on Sunday, and is certain to miss Arsenal’s visit to the Etihad Stadium on Saturday.

City then play Porto on Wednesday in the Champions League, before travelling to West Ham next Saturday, and Guardiola suggested the midfielder may not recover for those matches either.

Of Agüero who suffered a serious knee injury in June, Guardiola said: “He’s trained well and we are happy – he’s trained three or four days, we are happy to see him back on the pitch after a long time.”

Gabriel Jesus, Guardiola’s other frontline striker, remains unavailable because of a muscle problem.

“He has an injury in the part of his leg where if he injured it more he could be out for a long time,” said the manager. “I don’t know if he’ll be back for the Champions League.”

Ole Gunnar Solskjær has indicated Harry Maguire could miss Manchester United’s game at Newcastle on Saturday, saying the defender, who is struggling for form and was sent off with England, had “picked up a knock”.

United’s manager addressed Maguire’s poor form as it emerged the club had triggered the one-year extension on Paul Pogba’s contract, which was due to expire at the end of this season. The move protects the value of the midfielder, who has said a transfer to Real Madrid would be a “dream”.

It is rare for Solskjær to volunteer information regarding any player’s injury but he said Maguire sustained an unspecified problem with England. There have been suggestions it would be in the interests of Maguire and United for the player to be taken out of the firing line. Solskjær defended his captain, who stood trial in Greece before the season began.

“When Harry [helps] beat No 1 ranked Belgium it’s a normal day [yet] you get the headlines when you get a sending-off,” the manager said. “That’s football: ups and downs, you have to deal with it.

“Harry has got great resilience, he knows he’ll bounce back, he wants to play and work his way [away from] the last couple of games for which he’s been criticised. He picked up a knock just before he came [was sent] off. We’ll have a look at him today.”

Solskjær batted away a question about Pogba’s latest voicing of admiration for Real Madrid and confirmed the extension.

“Paul’s our player, he’s going to be here for another two years and I’m sure he’s focused on doing his best for us. We want to see the best for Paul and I’m sure in the next couple of years we’ll get the best out of him.”