Norway, Sweden and Denmark all broadcast Saturday’s games live with no fans present 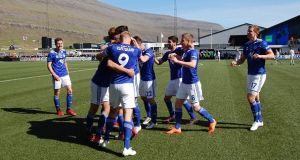 The last time KI Klaksvik and B36 Torshavn met, last October, it was to decide the destiny of the Premier League title, a match that attracted a record 6,000 people – about 11.5 per cent of the population of the Faroe Islands. On Saturday they played again, with no more than 50 people allowed into the stadium including the 22 players on the field, as European domestic football got back under way on the rocky archipelago between Scotland and Iceland.

The government also declared the islands entirely free of Covid-19. A total of 187 residents have tested positive for the virus, the most recent on April 22nd, but all have now recovered, there have been few hospital admissions and no deaths. “As a nation, we have achieved what few other countries have managed to do,” said the prime minister, Bardur a Steig Nielsen, in a statement. “As a society we should be grateful and proud of what we have accomplished. We will soon be able to get back to normal daily life as much as we can under these abnormal circumstances.”

Measures to control the spread of the virus, officially described not as a lockdown but a “slow down”, were instigated on March 12th and plans for their easing, including the weekend’s return of sport “under controlled conditions”, announced on April 9th.

In Torshavn last October KI secured a 3-0 away victory to win the championship. The tables were turned on Saturday as Torshavn won 2-0 in Klaksvik. There was nobody present to cheer their success, but the players forgot all about physical distancing when Sebastian Pingel’s header broke the deadlock with eight minutes to play, hugging like they did in the days before coronavirus. Meinhard Olsen added a second in the last minute.

“It was weird. I didn’t know where to run. First I set off towards the corner flag but suddenly I remembered that there are no fans so I just roared as loud as I could,” said Pingel, whose father Frank Pingel played for Newcastle in the 1988-89 season.

There had been some concern that fans might gather outside KI’s stadium or in the houses overlooking the ground, but very few defied the advice to stay away

KI are the best-supported team in the Faroe Islands and regularly draw crowds of thousands. “I just tried to concentrate on the game and encourage my teammates like in any other big game. But the difference is massive,” said their captain, Joannes Bjartalid. “We missed our supporters today. They usually give us an edge and I hope they can come back soon.”

The silence changed the match in several ways, particularly when KI’s Deni Pavlovic was struck in the face by Michal Przybylski’s elbow and those present heard the contact, and the felled player groaning on the ground. Every word shouted by KI’s and Torshavn’s respective coaches, Mikkjal Thomassen and Jakup a Borg, was audible, too. “Of course you can hear the coaches loud and clear but as the match progresses you are in the zone and just playing the game. You forget about the surroundings,” said Bjartalíð.

In a strong breeze and with temperatures hovering around freezing the Betri Deildin, as the Faroese league is known, had officially begun in Runavik two hours earlier when NSI Runavik’s game against the nation’s oldest club, TB Tvoroyri, kicked off. After eight minutes NSI’s Aron Knudsen became the first post-shutdown goalscorer in European football, and his side won 3-1. Knudsen’s father, Jens Martin Knudsen, was the famous bobble hat-wearing goalkeeper who was playing when the Faroe Islands shocked Austria and the world in 1990 by winning their first official competitive fixture 1-0.

Even in the top flight most teams use outdoor pitches, the lack of walls presenting some difficulties when it comes to the idea of playing behind closed doors. “We like to call it playing without spectators as there are no doors to close,” says Virgar Hvidbro, general secretary of the Football Association.

There had been some concern that fans might gather outside KI’s stadium or in the houses overlooking the ground, but very few defied the advice to stay away. “The locals have accepted the rules and discouraged people to gather around the ground,” said KI’s chairman, Tummas Lervig.

Instead supporters followed the matches on radio, television and online. A bonus of being the first league to restart has been new interest from Norway, Sweden and Denmark, who all broadcast Saturday’s games live.