Champions League and Europa League could be completed in August 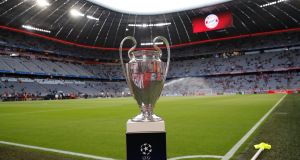 Uefa have confirmed that Ireland’s Euro2020 playoff game in Slovakia will not now take place in June but the federation appears to have accepted that publicly rescheduling fixtures amid the massive current uncertainty serves little purpose with no new dates set for the long list of postponements announced to member associations during a conference call on Wednesday.

In a statement issued afterwards, Uefa said simply that the playoff games and all other national team matches had been put off “until further notice”. The women’s qualifier in Ukraine, like the one in Germany this month, is affected but the Danish FA suggested that Euro 2021 has also been put back by a year. Uefa denied that that had actually been finalised but described the move as “likely”.

There was no specific mention of his season’s Champions and Europa leagues in the initial statement, just a reference to all other competitions being suspended, but the organisation is still anxious to resume games at the earliest opportunity while leaving national associations and leagues some space to finish domestic competitions.

The hope now appears to be to get this season finished by the first week of August one way or another; six weeks later than the target set out when they met a couple of weeks ago.

Their eagerness to see the Champions League and other campaigns played out to their conclusion is not hard to understand. The organisation’s annual report, also published on Wednesday, provided a timely reminder of just how high the stakes are, with the scale of its reliance on the revenue generated by its club competitions set out in an upbeat document the tone of which strongly suggests it was finished before the seriousness of the current situation became apparent.

In 2018/19 the federation generated some €3.85 billion of which €3.2 billion came from club football, the best part of it from the Champions League.

And in 2016, the report reminds us, the last European Championships generated an additional €1.3 billion. The return on the next edition of the tournament will be badly hit by its postponement to 2021 and Uefa, like all of its member national associations, even the ones who don’t qualify, will have to wait an extra 12 months for their share of the money to come through.

Of the €3.85 billion total for last year, which includes the €640 million generated by national team competitions, around €3.3 billion, or 85 per cent of the total, came in from broadcasters.

Uefa president Aleksander Ceferin has suggested that that he would not like to see the remainder of this season’s Champions League played behind closed doors but for that sort of cash, it is safe to say, he will surely suffer it if that turns out to be the only way in which to give the TV stations what they want.

Much the same might be said in turn about the big national associations or leagues in relation to their main domestic competitions. The Premier League is still technically scheduled to resume at the end of April and while, in reality, June is widely regarded as a more likely best-case scenario, Uefa is anxious not to complicate the conclusion of those leagues with an international break.

In the circumstances, the timing of the Euro2020 playoff games has come to be seen as small beer and they have been kicked down the road without any specific dates attached. Few listening in to Wednesday’s conference call between Ceferin, the 55 associations and assorted other stakeholders would have given that much of a second thought, but for the FAI it means there will be more lost revenue. And no avoiding now having to confront the question of whether Mick McCarthy gets to oversee the remainder of Ireland’s involvement in Euro2020 as would have been intended when his contract was drawn up.

Stephen Kenny, who is due to start on August 1st, is unlikely to want the schedule contained in his agreement to be unpicked but there is bound to be some sympathy for his predecessor and some awkward conversations are going to have to be had.

The financial implications, though, are far more serious, with the association here looking at the potential loss or deferral of huge amounts of revenue. Those drawing up its financial projections for this year would have been anticipating up to €20 million in income from Uefa alone this year. Some of that will still be paid, more of it was linked to the European Championships and is likely to arrive 12 months late. But the cost is still bound to run into millions and there will be much interest in the suggestion by Fifa that it is considering what it should do to help.

The association issued a brief statement on Wednesday, saying it accepted that the latest postponements were the right thing to do.

In relation to next season’s Champions and Europa leagues, a new deadline is to be set for confirming entrants “in due course”.

This is bad news for Irish teams who had already qualified for the two big clubs competitions this summer as it means the qualifying rounds are almost certainly not going to take place in July as would have originally been intended.

That in turn is likely to mean a delay in the payment of prizemoney by Uefa to the country’s two wealthiest clubs, Dundalk and Shamrock Rovers, whose seasons are very much geared towards those qualifying games, as well as the other two sides due to compete, Bohemians and Derry.

It is also a blow to the logic of the June 19th target date for a resumption of the League in Ireland with the intention there having been to give the four clubs the opportunity to play a few weeks of competitive football before their opening qualifiers. But that, like just about every other sporting schedule drawn up these days is being reduced to the status of ‘aspiration’ by the coronavirus.