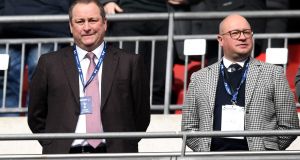 Under the shadow of coronavirus new rules are being made and unmade. Things that were unknown and alien a week ago are increasingly part of daily life. But some things do not need explaining. They feel instinctively right, or plain wrong and Premier League clubs furloughing their staff is one.

On Monday Mike Ashley took the plunge, announcing Newcastle would be the first club to stop paying all non-playing staff. Instead they could apply for emergency funding, 80 per cent of their salary up to £2,500 (€2,800) a month under the government’s coronavirus job retention scheme.

Newcastle turned over £178m (€202m) in their last published accounts. Ashley was estimated to be worth just under £2bn (€2.3bn) in the latest Sunday Times rich list. Yet the move did not surprise many; a week previously Ashley had decided his Sports Direct retail business should ignore the national lockdown and carry on trading because it sold essential items, such as Lonsdale-branded flight bags, until government pressure told.

Twenty-four hours after the Newcastle announcement, amid a lengthy statement calling on the world of football to “wake up to the enormity of what is happening around us”, Tottenham’s chairman, Daniel Levy, said he would be also be furloughing staff, with the taxpayer to pick up the bill. Spurs had just announced a profit of £172.7m (€196.8m) with Levy confirmed as the highest-paid director in English football, taking home £7m (€7.9m).

On Tuesday Norwich joined the gang, although they would top up their employees’ furlough payment so it matched their usual salary. Norwich operate on one of the smallest budgets in the Premier League but in 2018-19, in the Championship, they gave their highest-paid director £472,000 (€538,000).

Are football clubs going through straitened times? No doubt. Not only have they been suddenly deprived of the revenuefrom playing matches – from tickets and bar receipts to the ads on electronic hoardings – they face the prospect of having to return money to broadcasters should the season not be completed and to sponsors whose logos will not have been seen as often as they were promised.

In losing out on income they had assumed was guaranteed, football clubs are hardly alone. Some, even in the top flight, could be classed as medium-sized enterprises, taking in less each year than a Tesco Extra. But despite that, football clubs are not an ordinary business.

Of late there has been much speculation as to how the Premier League may complete the season and thus forestall some of its losses. The idea of a sporting “mega event” has been floated, with clubs playing lots of football in short order on TV. It has apparently been encouraged by government which, given the unknowable knock-on effects to public health, sounds about right. Such an event, it has been suggested, could boost the nation’s morale.

This idea attests to an obvious fact: Premier League football plays a central role in British life. Clubs and players are put on pedestals, treated as role models and heroes. They did not ask for it to be that way but to say those at the top do not benefit, and enjoy benefiting, from that privilege is nonsense. That is why actions such as those taken by Newcastle, Tottenham and Norwich have immediately and pungently failed the smell test.

In the middle of all this are the players. We are used to the fetishisation of their great wealth and the question, never far behind, as to whether they deserve it. They did not create this problem but their union, the Professional Footballers’ Association, is wrangling with the Premier League over whether their wages should be subject to alteration in order to help clubs stay afloat.

The PFA does not trust the clubs and perhaps rightly so. On the other hand the PFA is an opaque organisation with questions that linger over what it does with its substantial revenues beyond paying its chief executive, Gordon Taylor, a salary comparable to that of a Premier League player.

The players should take this moment and break from their union. Like many others in this crisis they should use it to do good. Bournemouth are pursuing the same approach as Norwich but Eddie Howe and his staff are taking pay cuts voluntarily.

Premier League players should follow Leeds’ example and offer to forgo a portion of their salary, too, so that none of their colleagues are furloughed and to protect as many livelihoods lower down the pyramid as they can.

It’s clear, from listening to individual players, that this is what many of them want. They should set an example to those higher up the football food chain and just do it. The country would thank them. – Guardian