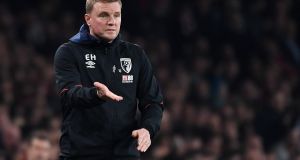 The Premier League and EFL have urged the footballers’ union to accept that players will have to take pay cuts, not just deferral of their wages, as the sport grapples with the enormous, unprecedented challenges presented by the Covid-19 crisis.

At a conference call held by senior executives from the leagues and the Professional Footballers’ Association on Wednesday, the Premier League’s executive director, Bill Bush, is understood to have stressed the scale of the financial hit clubs are facing during the suspension of competitions.

The potential shortfall includes £750m (€850m) in television money, which in effect covers the remaining games of this season, ticket and other matchday income (because even if the season can be finished matches are almost certain to be played behind closed doors), and other revenues including from sponsorship. The EFL’s TV deals are a fraction of the Premier League’s £8bn-plus (€9bn-plus) over three years but that leaves their 71 clubs more reliant on matchday income.

Football’s rules require players’ contracts to be paid in full and the PFA’s stance, represented at the meeting by their chief executive Gordon Taylor, is that deferrals of wages, not pay cuts, will be considered. The PFA argues this is sensible, and that if deferred wages cannot ultimately be paid because of deficits caused by the crisis, this can be negotiated later.

However the leagues are said to have impressed on Taylor that normal conditions cannot apply now and that players will have to share some of the game’s financial losses. After the meeting the participants issued a statement saying discussions had been “constructive” and were “set to continue in the next 48 hours”. The leagues and PFA will have another call on Thursday; the Premier League has a meeting with its clubs on Friday.

Each club in all four divisions and down football’s pyramid has its own employment relationships with players and non-playing staff, so will come to its own arrangements. Some Premier League clubs are understood not to be contemplating wage cuts or even deferrals as they have enough money to pay the players. Others are contemplating asking players to defer their wages while some are likely to try to agree cuts.

On Wednesday Bournemouth put non-playing staff on the government’s job-retention furlough scheme – as Tottenham, Norwich and Newcastle have – while announcing that the club’s manager Eddie Howe, chief executive Neill Blake, technical director Richard Hughes and assistant manager Jason Tindall had taken “significant, voluntary pay cuts”. Brentford in the Championship are understood to be on the verge of agreeing pay cuts with players.

Under the furlough programme, the British government pays 80 per cent of an employee’s wage, up to a maximum £2,500 (€2,800) per month, where somebody has been laid off completely from work. Employers can top up that limit to make a full wage, which Norwich and Bournemouth said they would do. Some clubs in League One and League Two, and in the National League, will be using the furlough scheme for players as well; Forest Green and Portsmouth have already done so.

Agreement will also have to be reached about how players will be paid if the season is extended beyond football contracts’ standard June 30th termination date. The PFA stance, as with the umbrella international footballers’ union Fifpro, is that players must be paid in full up to June 30th, then additionally during an extension period. However, even if the remaining matches do go ahead, broadcasters will not pay the leagues any extra money for showing them.

The football authorities and broadcasters are stressing they do not want to end up in a dispute given the terrible nature of the coronavirus crisis and their long-term commercial relationships. But Sky and BT Sport face a financial crisis of their own as millions of people suddenly struck with job or pay cuts can no longer pay or justify paying TV subscriptions while no live sport is played. Even if the season is completed, which looks optimistic, the broadcasters may ask for rebates given their own loss of income.

Highly paid footballers have become a visible focus of public criticism during the crisis, particularly after Spurs announced that non-playing staff had taken 20 per cent pay cuts, with some also placed on the furlough scheme. A YouGov poll released on Wednesday found that 92 per cent of British people believe that Premier League players should accept a pay cut during the crisis, and 67 per cent believe the cut should be at least a halving of their salary.

Julian Knight, the Conservative chair of the UK’s department for culture, media and sport committee, accused English football of “crazy economics” and operating in a “moral vacuum”. – Guardian