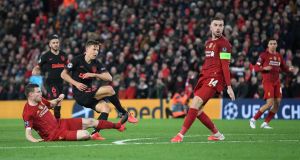 Our family’s very own field of dreams is an Astroturf that abuts a sprawling car park on the outer reaches of the local university. From high summer when the mercury tips into the 90s to deepest winter when it’s flecking snow, the Hannigan boys are out there taking aim, attempting audacious volleys, and having inevitably controversial penalty shoot-out competitions.

Sometimes, their father comes over all middle-aged and sits in the car correcting undergraduate essays while they brave the inclemency. Other times, he’s in the thick of it, invariably blaming a poor choice of footwear if he fails to curl one into the top corner.

Whatever ails my children, the moment we turn left into the facility and see a pair of empty nets yawning invitingly, something deep in our DNA is triggered and the collective mood improves. Which explains why we go there every chance we get. Shortly after sun-up in high summer. Long into winter evenings once the floodlights are working. On Thanksgiving morning before pigging out for the day. On Christmas Eve afternoon to shorten the waiting and to tire over-excited bodies. The only thing that ever keeps us away is those dismal few weeks every January and February when a snow blanket is draped over the place and, even then, we do a regular drive-by to establish the exact status of the spring melt.

Last Sunday we drove past under abnormal circumstances. A pair of police cruisers stood sentry at the entrance to our place of worship, blue lights flashing through a parking lot now converted into a drive-through Covid-19 testing centre and a field hospital. The lads were straining out the window to see if they could make out doctors in hazmat suits walking between the shanty town of ominous white tents plucked straight from the set of every disaster movie we’ve ever watched. In the distance, across the canvas rooftops, we could just about glimpse the green sward, one lonely crossbar and a swatch of empty net. Far away. So close.

The natural rhythms of our sporting life have been thrown all out of kilter by the bizarre events of the last few weeks. Our private playground declared off-limits until who knows when and organised soccer put on ice until further notice. The children’s seasons traditionally start the weekend after St Patrick’s Day, campaigns that kick off with the insulation of hooded sweatshirts under frigid jerseys and end with stinging sunblock sweating into their eyes. I am a single father of three boys and I have measured out my life in such soccer matches.

I have, along the way, grown to despise this uber-competitive, dystopian version of the sport. So, I don’t miss the fixtures themselves right now. I don’t pine for mornings listening to overcaffeinated parents trying to achieve vicariously through tormented children. I don’t long to see clip-board wielding martinet coaches bellowing abuse at petrified youngsters. I could live happily without hearing the cacophony of the blighted sidelines ever again. But, man, I miss the road trips to away games, the ad hoc pilgrimages to all the corners of this beautiful island that I have called my home for two decades.

My eldest son Abe turned 20 last week and is long retired from the travel team scene but I learned from my years soldiering alongside him that these matches are neither about the destination nor the result but the journey itself.

Neither of us can recall the minutiae of all his victories and defeats but we still laugh about the driving mishaps, the wrong turns that often took us towards the waters of the unfamiliar South Shore, the frantic races to make it to obscure high school fields on time. And meandering return legs when we stopped for food, dodgy burgers and iffy fries consumed in Long Island towns we never visited before or since. Places we might never see again. The seemingly inconsequential stuff with which we embroider the quilts of our memories.

That’s what I miss then these last few weekends. The alone time in the car with a child and the quality of it. Sometimes talking, sometimes sitting in a comfortable silence punctuated only by the never-ending argument about the choice of soundtrack (apparently, there is no end to how much Green Day an adolescent can listen to). These suddenly bereft Saturdays and barren Sundays, there is no schedule anymore, no typing names such as Massapequa and Oyster Bay into the phone to figure out the estimated time of arrival. We have all the time in the world. And no matches to go to. So, we improvise.

In an attempt to alleviate the ennui the other day, 13-year-old Charlie and nine-year-old Finn decided to recreate Liverpool-Atletico Madrid, the last live match we watched together before the threat of apocalypse loomed into view.

In the interests of verisimilitude, they went upstairs to poke out the relevant shirts from their collections. As they were togging on, I knelt into position by the front door and then asked them to pause on the landing. I clicked on the phone and fired up “The Champions’ League” theme. They knew immediately what I was at, marching out together, balls under their oxters, grinning from ear to ear before kicking lumps out of each other for the next half hour.

The game is not gone. It’s just different now.

1 Sideline Cut: Vignette shows why Bird is the true shark in The Last Dance
2 Philip Browne admits funding model for Irish rugby is not sustainable
3 Zoom calls with Rory and the GUI bake-off: Neil Manchip keeping the flag flying
4 NFL invite Colin Kaepernick to workout for clubs to evaluate him
Real news has value SUBSCRIBE
Crossword Get access to over 6,000 interactive crosswords