Long has first-team plans at Bohs for Brighton-bound Ferguson 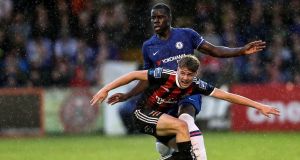 Bohemians’ Evan Ferguson is challenged by Kurt Zouma of Chelsea during a friendly at Dalymount Park back in July. Photograph: Laszlo Geczo/Inpho

Evan Ferguson has the potential to make a mark with the Bohemians first team before heading away to Brighton, says Keith Long, but the manager insists the 15-year-old’s welfare will be his and the club’s top priority.

Long came in for some criticism after handing the then still 14-year-old his league debut in Derry last month and acknowledges that some of the concerns raised in relation to the teenager really had not occurred to him. But he is adamant he will do nothing to hinder the progress of a player who has already agreed the basis for a move to England’s south coast some time after his 16th birthday.

“Obviously hindsight is probably the best manager in the league I’d imagine, because I didn’t think of child welfare issues,” says Long. “The fact that he might be in a man’s dressingroom or any of that stuff. I discussed it with Barry Ferguson [his father, a former Irish youth international who also had a spell at Bohemians] and it was felt that it was the right substitution to be made; it wasn’t a PR stunt because his deal was already done with Brighton.

“There was no gain to be had in that sense but on that bench at that time we were very, very short of numbers, we had lots of people out up in Derry, in a game where we needed to pick up something, we needed to make sure that Derry didn’t steal a march on us. We brought Evan Ferguson on for the last six or seven minutes and he did fairly well. He caused them a couple of problems. I didn’t think of the consequences or any of that stuff, it was a footballing decision made on the basis that I felt Evan was the best option off the bench at that time.”

There was, he admits, “a backlash” from people Long believes were genuine in their concern for the teenager, with some suggesting that he should not have been in a dressingroom with grown men, although Long is happy that Ferguson was very well looked after.

The issue, though, is likely to persist next season with the young striker set to train first and foremost with the club’s under-19s while also being in the reckoning for the Under-17s and senior teams. Having also featured briefly in the friendly against Chelsea during the summer, and done remarkably well, Long admits to wondering just what part he might be able to play for the first team, but insists that nothing will be put ahead of Ferguson’s welfare.

“He is a good player, a really good player and I can’t say it [using him more in the first team] hasn’t crossed my mind at times because he gives us something completely different.

“He can play as a nine, as a 10 and he gets goals, so it has crossed my mind but as I’ve said; it has to be the right thing for Evan. The last thing we want is for him to be poleaxed by some centre half and his career in tatters. And that’s the risk you take every time you put a 16- or 17-year-old out on the pitch; injuries are part and parcel of the game. Although thankfully the laws of the game protect players more now and a lot of players in the league are young too.

“Obviously he has stature . . . physically, he looks like a man and he plays like one at times too. But he’s still a boy so we have to be careful. Brighton obviously see something in Evan and they have recruited quite well in the Irish market over the years, haven’t they. I like what they do as a club, there is a lot to be learned from that I think.

“But Evan, and I don’t want to put too much pressure on him, because I think he gets talked about as the next Troy Parrott and things like that. And that’s not fair on the boy because he needs to just concentrate on enjoying his football while he is still here; play for his country, play for Bohs at whatever age group, be that the 17s, be that the 19s or be that, at times, maybe the first team but we won’t put too much pressure on Evan.

“We will try to develop him, we will try to do the right thing by him as much as we possibly can while he is here and then hand him over to Brighton. And then hopefully he can go over there have a good professional career and hopefully play for his country.”