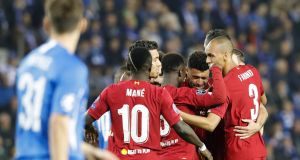 Two travelling Liverpool fans were forced to watch Wednesday evening’s 4-1 Champions League victory in Genk on TV after going to the Belgian city of Gent by mistake.

Belgian media reported on Thursday morning that the two unnamed fans watched the match in an Irish bar in the Belgian city of Gent, around 80 miles from Genk – which is close to the Dutch border – including a photo of the disgruntled pair holding their match tickets.

According to the report it was just 30 minutes before kick-off when the fans realised their error, leaving no time to complete the 90-minute journey to the Luminus Arena, where two goals from Alex Oxlade-Chamberlain helped the Reds to a 4-1 win.

The fans had reportedly spent €70 each on their match tickets and €150 each on train tickets, a total of €440 just to watch their team in action from a foreign pub.

But there was some good news for the two fans: KAA Gent, who face Wolfsburg in the Europa League on Thursday evening, extended an invitation via Twitter for them to attend the match.

Fans of the two Belgian clubs will hopefully avoid making a similar error next month when Genk, currently sixth in the Belgian Pro League, host third-placed Gent in a domestic encounter on Sunday November 10th.

Despite Liverpool powering to an emphatic away victory, manager Jürgen Klopp said afterwards that he was unhappy with the performance of his players.

The result was also marred by Liverpool fans displaying an offensive banner depicting Divock Origi. The club is now investigating, saying: “We will look to identify those responsible for bringing it into the stadium and act accordingly.” – Guardian

1 Seán O’Brien: Anger over my parents’ break-up never left me
2 Ireland get the job done against Italy to keep alive Six Nations hopes
3 Ireland 50 Italy 17: Ireland player ratings
4 Hugo Keenan and Will Connors: The best of friends, the best of debuts
5 France warm up for Ireland with impressive win over Wales
Real news has value SUBSCRIBE
Crossword Get access to over 6,000 interactive crosswords