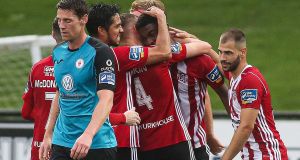 A 45 minutes kick-off delay at the Brandywell, due to a faulty floodlight issue, didn’t deter Derry City’s push for European football next season.

Facing Sligo Rovers, the Candystripes netted timely goals on either side of half-time with the visitors appearing to struggle in the final third.

Derry striker David Parkhouse squandered two glorious chances during the opening 12 minutes as the home side opened on the offensive.

A superb run and cross by Junior Ogedi-Uzokwe dropped perfectly for the striker but his volley failed to hit the target from close range.

And 10 minutes later a Ciaran Coll cross from the left was met by the head of Parkhouse but the effort was blocked by Sligo keeper Edward McGinty.

Derry, however, were fortunate when caught on the counter-attack in the 18th minute.

Sligo hitman Romeo Parkes raced clear before he was denied by Derry ’keeper Peter Cherrie in a one-on-one.

But the home side deservedly grabbed the breakthrough in the 20th minute and it was a superb individual goal by Junior.

The Colchester United loanee weaved his way into the danger area before his strike crashed off the inside of the post and into the net.

Sligo went close to levelling matters in the 31st minute, but Cherrie came to Derry’s rescue after John Mahon’s diverted a Sam Warde corner towards the goal.

However, within one minute of the second half, Derry had doubled their lead with Junior playing the role of provider.

The left winger again skilfully tricked his way into the danger area and his accurate pull back was met by Jamie McDonagh who hammered the ball high into the Sligo net from 12 yards.

Young Jack Malone entered the fray as a 75th minute substitute and within two minutes, he ended this match as a contest.

Having cut in from the left flank, Malone let fly with angled shot which screamed into the net giving McGinty no chance.

Mikey Place’s penalty with 10 minutes left earned struggling Finn Harps their first away of the season at the RSC.

This late victory still leaves them rooted to the bottom of the table, behind UCD on goal difference, but they were worthy of the three points against a Waterford also sinking into relegation trouble.

One point from their last five games has left Alan Reynolds’ side just seven points ahead of the bottom two.

Late on in drab contest, Place enticed George Poynton into a lazy foul and he stepped up to send Matt Connor the wrong way.

Waterford, without a victory for seven weeks, began at pace and could have soared ahead after just six minutes.

Maxim Kouogun was left unmarked to connect with Shane Duggan’s corner and his header glanced the top of the crossbar.

Duggan himself went close shortly after by raking his shot wide but Harps, relying on their wing-backs to operate om the counter-attack, finished the half stronger.

Firstly, Sam Todd flashed his header from eight yards just over and his fellow defender Danny O’Reilly drew Matt Connor into a save from point-blank range on the stroke of the break.

Harps goalkeeper Mark McGinley pulled off an excellent save to deny Cory Galvin early in the second half but Waterford look a team suffering from the recent departures of Bastien Héry, Damien Delaney and Izzy Akinade.

1 ‘A radical departure’: Who are CVC and what are their aims with rugby?
2 Ken Early: Champions League has stolen international football’s clothes
3 Connell losing touch with club championship is real tragedy of Normal People
4 Colin Kaepernick’s exile is too fresh for NFL to speak out on US protests
5 1913: The year the GAA really started to get its house in order
Real news has value SUBSCRIBE