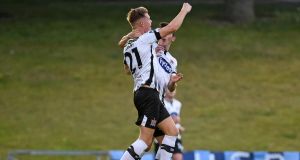 Central defender Dan Cleary scored twice to top and tail a comfortable victory for Dundalk at the UCD Bowl to edge the champions another step closer to retaining their title.

Dundalk are now unbeaten in 19 league games, 24 in total against domestic opposition.

A sixth straight league defeat leaves UCD six points adrift at the foot of the table, and they’ve now played a game more than second from bottom Finn Harps.

Vinny Perth showed the depth of his Dundalk squad with seven changes from Monday’s 3-0 home win over the same opposition as they expectedly dominated from the off, taking the lead on 13 minutes.

Sean Murray arced over Dundalk’s third corner of the game for the unmarked Cleary to power his header past goalkeeper Conor Kearns.

While Dundalk continued to have plenty of the ball into the second half, they laboured to create much before extending their lead on 70 minutes.

Michael Duffy was sprung from the bench and immediately invigorated their attack.

Four minutes after his introduction, the winger skipped through the inside left channel to rifle a shot past Kearns at his near post.

Cleary then had the final say two minutes into added time with a near post headed finish from Duffy’s corner.

Waterford arrested a dire run of five home defeats by holding fourth-placed Derry City to a draw at the RSC.

It looked ominous for the Blues when they fell behind just 11 minutes in. After Barry McNamee saw his initial shot blocked, he teed it up for Ciarán Coll to swing in a cross for Junior Ogedi-Uzokwe to chest the ball home.

City’s top scorer David Parkhouse was uncharacteristically wasteful just minutes later by firing wide with the goal at her mercy.

Neither defence looked assured and relegation-threatened Waterford took advantage to equalise two minutes before the break.

John Kavanagh spotted Michael O’Connor lurking at the back post and the Ireland Under-21 striker rose above Jamie McDonagh to head inside the post.

Neale Fenn’s first game in charge of Cork City ended in defeat as they were beaten 4-2 by Sligo Rovers at Turner’s Cross.

Sligo took the lead on 31 minutes when Romeo Parkes skipped past the defence before slotting the ball under Mark McNulty but City levelled two minutes later as Dan Casey headed home from a corner.

Rovers retook the lead before the break as Ronan Coughlan found the bottom left corner and they added a third on the hour when Parkes hammered Kristopher Twardek’s cross into the roof of the net.

Shane Griffin’s stunner gave City hope but it wasn’t to be Fenn’s night as Coughlan added a fourth late on following an error from McNulty.