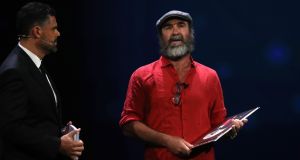 If you’re reckless enough to ask Eric Cantona “what’s going on through your mind right now?”, as our host Pedro Pinto did at Thursday’s Champions League draw in Monaco, then you really only have yourself to blame when his response leaves you discombobulated.

Twenty-two years after the end of a football career that included spells at Manchester United, where his name was shortened to ‘Dieu’, and in a prison cell, after he kung-fu kicked an irksome Crystal Palace fan, Eric was receiving the Uefa President’s award for his “outstanding contribution to the game”, the citation acclaiming him as a man who “speaks his mind”.

That he does, but a little like that time he responded to his punishment for his kung-fu kick – “When the seagulls follow the trawler, it’s because they think sardines will be thrown into the sea” – his mind isn’t always conventional.

So, when Pedro asked him on stage for his thoughts, Eric, naturally enough, opened by quoting from King Lear before straying in to an area not often addressed by, say, Harry Redknapp.

“As flies to wanton boys we are for the gods, they kill us for the sport,” he said. “Soon the science will not only be able to slow down the ageing of the cells, soon the science will fix the cells to the state and so we will become eternal. Only accidents, crimes, wars, will still kill us but unfortunately, crimes and wars will multiply. I love football. Thank you.”

Like most in the audience, Lionel Messi and Cristiano Ronaldo donned expressions that suggested Eric might as well have been speaking in Mandarin.

There followed a heated global debate over what on earth he had been talking about, (and why he was wearing a flat cap that made look like something out of a Hovis ad), particularly because the King Lear line had been uttered by a fella who’d had his eyes gouged out and wanted directions to the cliffs of Dover so he could throw himself over. Was it an allusion to what Ronaldo might have wanted to do to Messi when the Argentinian was named Forward of the Year?

And the second bit, was he telling Messi, Ronaldo and the rest of the audience that while advances in science might, one day, appear to make them immortal, they’re all going to die any way thanks to war and the like?

This, it has to be said, was a mood killer in the auditorium, when Uefa had succeeded in making it a bubbly celebration of football before then, the governing body only anticipating acceptance speeches made up of thanks to agents, sponsors and parents, in that order. So much so, Eric is unlikely to be ever invited back.

He has a habit, though, of bursting balloons, like that time an ecstatic John Stones signed for Manchester City for £47.5 million. “We know why Stones is so expensive,” said Eric, “because he comes with a fully equipped trailer that he pulls behind him when he plays.”

1 Cheltenham faces criticism after racegoers suffer Covid-19 symptoms
2 Ian O’Riordan: Learning to run for the first time all over again
3 Coronavirus crisis could cost the GAA up to €60 million
4 My favourite sporting moment: Shels finally make all the heartbreak worth it
5 Leaving Certificate PE is a whole new ball game
Real news has value SUBSCRIBE
Crossword Get access to over 6,000 interactive crosswords