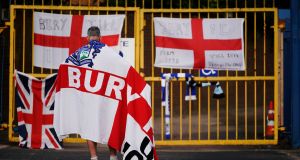 A disconsolate supporter at Bury’s Gigg Lane ground following a decision by C&N Sporting Risk, saying it was unable to continue with its takeover of the club which was subsequently expelled from the Football League after 134 years. Photograph: Christopher Furlong/Getty Images

It has been one of those weeks to fall back on Arthur Hopcraft.

Hopcraft’s 1968 book The Football Man is a classic, of its time yet timeless. It contains so many memorable lines and images a list of them could fill this space. You’d be happy.

But it is the eight sentences opening the introduction which are quoted most often and which resonate. They will have heads nodding from Bolton to Bury to wherever next (Oldham?) English football’s simple and complex infuriating economic crisis reveals itself:

“The point about football in Britain is that it is not just a sport people take to, like cricket or running long distances. It is inherent in the people. It is built into the urban psyche, as much a common experience to our children as are uncles and school. It is not a phenomenon; it is an everyday matter. There is more eccentricity in deliberately disregarding it than in devoting a life to it. It has more significance in the national character than theatre has. Its sudden withdrawal from the people would bring deeper disconsolation than to deprive them of television. The way we play the game, organise it and reward it reflects the kind of community we are.”

In a tumultuous week in England – not just in English football – the final sentence about how the game is played, organised and rewarded is a poke in the ribs.

Around the same time on Tuesday evening as Sky Sports’ crass countdown to the implosions at Bury and Bolton, a few Lancashire miles away Manchester United were arranging the departure of Alexis Sanchez on loan to Inter Milan.

While Sanchez earns a reported €400,000 per week at Old Trafford, Bolton’s creditors include the local St John’s Ambulance and a hotel in Colchester.

This is how England has been reorganised. The 1979 election of Margaret Thatcher changed the direction of Britain’s ideological travel, particularly England’s.

“Where there is discord,” Thatcher said at the outset, “may we bring harmony”.

Instead, where there was discord, Thatcher sowed seed. Trickle-down capitalism was a cascade of deregulation, a theory imported from the US. Reaganomics doesn’t like organisation but it does like rewards. It made its way into football and those who thought of themselves as big fish felt enabled.

It could be historic coincidence that it was 1981 when football club directors, for the first time, were allowed a salary if they worked full-time; that it was 1982 when one of them, Everton chairman Philip Carter, began to threaten a breakaway “super league”; or that it was 1983 clubs when clubs voted to end gate-sharing. Or maybe not.

This was the first great anti-democratic, anti-redistribution move. Until then visiting clubs received 20 per cent of gate receipts, so that Bolton, for example, earned money when visiting Anfield.

It helped maintain democracy on the pitch. It helped keep the smaller clubs going. And they did. Abroad, a provincial club, Nottingham Forest won the European Cup; at home Ipswich won the FA Cup and Wolves, Norwich and Luton won the League Cup. There were challengers from a variety of sources.

In 1968 Hopcraft could assert that the club director was “principally a committee man in business”. Just over a decade later, it no longer held. He was a businessman on committees.

Hopcraft also wrote: “The institution of the football club director is the sport’s central contradiction. The amateurs govern the professionals.”

This, too, no longer applied to directors such as Martin Edwards at United, Irving Scholar at Tottenham and David Dein, a man keen to get on at Arsenal. These were professionals; the amateurs were those at the Football Association who, as David Conn put it in his switched-on 2004 book The Beautiful Game?: “By 1983 the governing body seemed to have lost its way, and its eyesight”.

It should not have been hard to see.

Edwards, as Conn records, said the following: “The smaller clubs are bleeding the game dry. For the sake of the game, they should be put to sleep.”

Imagine reading that in Bury.

This is what can happen in a radical atmosphere: certain types feel enabled, then emboldened. Weak governance permits disorganisation, things fall apart and cynical men clean up.

Naive governance allowed Tottenham Hotspur FC to be moved into a holding company in 1983. The FA’s rules still applied to the club but not to the holding company which owned it. Hey presto, Blanchflower’s club was on the stock market.

In 1988 came a new four-year TV deal between ITV and BBC, who both again benefitted from its smallness. Either the FA was complicit or incompetent in not challenging the broadcasters and demanding more for a game inherent in the people. Instead they caved in to the free market men, who do love a monopoly.

The tragedies in Bradford, Brussels and Sheffield also formed thinking, as did the Taylor Report.

By the end of the existing TV deal in 1992 satellite television was around and breakaway talk had been made real. The Premier League was born on Sky.

To its great luck, Sky coincided with the rebirth of United under Alex Ferguson although, as Edwards would emphasise, the money United made in the 1980s was a factor in their rise in the 90s.

The Premier League then got Kevin Keegan under Thatcher’s favourite businessman John Hall at Newcastle, Jack Walker – domiciled offshore in Jersey but “Blackburn through and through” – and Arsène Wenger, appointed by Dein. There was excitement, stories, inflation. Roy Keane, Eric Cantona and Alan Shearer made a lot of other football people very rich.

The Football League, cut adrift, looked on in envy. One of their responses was to alter how teams tied in the table were measured. They moved from goal difference to goals scored in the hope this would enhance scoring and entertainment.

It didn’t. So after the 1998/99 season they reverted to goal difference.

But this affected one club in particular – Bury. Then in the second tier of English football, in the ’98/99 season Bury had a better goal difference (minus 25) than Port Vale (minus 30), the team immediately above them. But Bury went down as they had scored less goals, 35 to Vale’s 45.

They have been the wrong side of decisions before, this club founded by two churches in the town after a meeting at the Waggon & Horses Hotel 134 years ago. That was the spirit of that age. It’s different now.

Greed became good. Smaller clubs, of course, are as guilty of dreadful economic decisions as United were with Sanchez. It’s just one of the safety nets – collectivism – was removed a long time ago.

“I worry about the heart and soul of the game,” Graham Taylor says in Conn’s book. A man of Grimsby and Lincoln as well as Aston Villa and England, Taylor adds: “I believe football is about much more than the big clubs. It belongs to the nation, to everybody.”

Just as Hopcraft would have been dumbfounded by Steve Dale at Bury, Taylor questioned the motivation of those moving into the Premier League in the 80s and 90s. He could see they were businessmen; whether they were football men is a matter of significant doubt.