Shane Long left out of Ireland squad for Switzerland qualifier 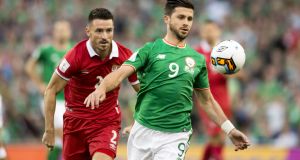 Shane Long has been left out of the Ireland squad for the Euro 2020 qualifier with Switzerland. Photo: Andrew Surma/NurPhoto via Getty Images

James McCarthy has made the cut for Ireland’s European Championship qualifier with the Crystal Palace midfielder’s start for his new club in the League Cup this week enough, it seems, to persuade Mick McCarthy that the midfielder is fit enough to be considered at international level again.

Robbie Brady and Harry Arter will miss the game due to injuries while Shane Long, who was included in the manager’s expended 40-man preliminary squad a couple of weeks ago, has been omitted despite featuring for Southampton in the club’s 1-0 victory at Fulham on Tuesday night. There was no suggestion then that the striker had picked up an injury in the 15 minutes he played after coming on from the bench and none now that that is the reason for his omission.

Alan Browne and Alan Judge are among the players to return to the group and McCarthy will be at the Dublin derby between Shamrock Rovers and Bohemians in Tallaght on Friday night in order to assess the form of midfielder Jack Byrne who is included once again.

Young Bournemouth goalkeeper Mark Travers is one of the three goalkeepers named after having proven his form and fitness on Wednesday evening when he kept a clean sheet then saved three penalties in a shoot-out against Forest Green Rovers.

“The big thing in picking this squad has been game-time for the players,” says McCarthy, who had delayed the finalising of his trimmed down squad in order to see who played in the League Cup.

“I named a 40-man provisional squad a fortnight ago because so many of the players had yet to play for their clubs but thankfully that situation has improved dramatically since then.

“I watched James McCarthy play the full 90 minutes for Palace in the Carabao Cup on Tuesday while Alan Kelly was at Burnley on Wednesday night to see Jeff Hendrick and Kevin Long start against Sunderland.

“Alan Browne is back in the team at Preston and Mark Travers started for Bournemouth on Wednesday and saved three penalties. Conor Hourihane scored two goals for Aston Villa at Crewe on Tuesday and Glenn Whelan is playing again now that he has signed for Hearts. It is great to have them back on the pitch ahead of such a big game against the Swiss and then for the friendly against Bulgaria.”