All the latest information on injuries and line-ups 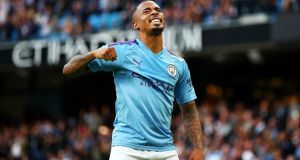 Gabriel Jesus could return for champions Manchester City as they take on Burnley at the Etihad Stadium. Photograph: Clive Brunskill/Getty Images

Southampton (18) v Manchester United (5), 12.30pm – Live on BT Sport
Southampton will be without wingers Nathan Redmond and Moussa Djenepo after both picked up injuries in the midweek Carabao Cup win at Fulham. Republic of Ireland striker r Michael Obafemi, who scored the winner at Craven Cottage, is doubtful because of cramp. Left back Ryan Bertrand (ankle) has returned to training and will be assessed.

Anthony Martial and Luke Shaw have joined Manchester United’s injury list. Martial sustained a thigh complaint in the loss to Crystal Palace, while Shaw pulled up with a hamstring issue that is likely to keep him out for a further four weeks. Eric Bailly, Diogo Dalot and Timothy Fosu-Mensah are also absent through injury, while Alexis Sanchez has joined Inter Milan, Chris Smalling is set to move to Roma and Matteo Darmian is also potentially leaving.

Chelsea (13) v Sheff United (9) – Live on Premier Sport
N’Golo Kante will again be missing for Chelsea due to an ankle sprain. Pedro (hamstring) is also out having been injured in the warm-up ahead of the win at Norwich last time out, with Antonio Rudiger (knee) and long-term absentees Callum-Hudson Odoi and Ruben Loftus-Cheek (both Achilles) also ruled out.

Club record-signing Oli McBurnie could be handed his first Premier League start for United. The 23-year-old striker scored his first goal for the Blades in the defeat to Leicester and could be rewarded with a place in the XI at Stamford Bridge, having been withdrawn at half-time during the Carabao Cup win against Blackburn in midweek. United boss Chris Wilder brought in 10 new faces for that second-round tie and wholesale changes are expected again.

Crystal Palace (10) v Aston Villa (16)
Palace defender Scott Dann could miss the visit of Aston Villa with a hand injury. The defender played in Tuesday night’s Carabao Cup defeat to Colchester but hurt his hand during the game and could now be absent this weekend. James Tomkins (groin) and Mamadou Sakho (knee) are both out.

Villa left back Matt Targett is out after suffering a hamstring injury on his debut against Crewe in the Carabao Cup. James Chester remains unavailable with a hamstring injury he suffered in pre-season while Jonathan Kodjia is not ready to return from an ankle problem.

Leicester (4) v Bournemouth (11)
Leicester skipper Wes Morgan is a doubt after coming off in the midweek Carabao Cup win over Newcastle with a back problem. Ben Chilwell (hip) and Wilfred Ndidi (hamstring) are available for boss Brendan Rodgers.

Bournemouth defender Charlie Daniels is facing a lengthy lay-off after suffering a dislocated kneecap in last week’s defeat to Manchester City. Lewis Cook has stepped up his recovery from his own serious knee injury but it is not known when he will return. Simon Francis (knee) and Lloyd Kelly (ankle) continue to be assessed, while Dan Gosling (hip), David Brooks (ankle) and Junior Stanislas (knee) are still recovering.

Manchester City (2) v Brighton (8)
John Stones and Gabriel Jesus could return for the champions. The Brazilian striker was expected to be sidelined until after the international break with a hamstring injury while Stones has missed the last two games with a thigh problem, but boss Pep Guardiola had said both are “much better”. Leroy Sane remains a long-term absentee while Benjamin Mendy is working his way back to full fitness.

Brighton remain without suspended forward Florin Andone as he serves the second game of a three-match ban, while Jurgen Locadia on Thursday left Albion to join German club Hoffenheim on loan. Young Irish striker Aaron Connolly will hope to be involved after scoring in the Carabao Cup win at Bristol Rovers but injured trio Ezequiel Schelotto, Jose Izquierdo and Yves Bissouma remain sidelined.

Watford boss Javi Gracia has a near fully-fit squad to choose from with captain Troy Deeney the only player unavailable. He underwent knee surgery last week and is set to be out of action for at least two months. Roberto Pereyra (thigh) is fit enough to play after missing last week’s defeat against West Ham.

West Ham (14) v Norwich (17)
Michail Antonio is waiting to discover the extent of the hamstring injury which forced him off just seven minutes into Tuesday’s Carabao Cup win over Newport. Javier Hernandez is back in training after a knock to his knee and could return this weekend. Winston Reid, after spending nearly 18 months on the sidelines, is only a few weeks away from a potential return to full fitness.

Norwich have Christoph Zimmermann and Josip Drmic available. Zimmermann was taken off in the Carabao Cup clash with Crawley due to hip and back complaints but is ready to return while Drmic is back after a hamstring problem. Grant Hanley has a groin injury which rules him out, though, and Timm Klose has a knee injury which could keep him sidelined for several months.

Burnley (6) v Liverpool (1), 5.30pm – Live on Sky Sports
Burnley will be without Johann Berg Gudmundssonn due to a calf injury. Fellow winger Robbie Brady stepped up his recovery from a fractured rib with a 75-minute run-out for the under-23s earlier this week although he is unlikely to be in contention to face the European champions, while midfielder Steven Defour remains a long-term absentee.

Liverpool goalkeeper Alisson Becker will again be missing as he recovers from a calf injury. Midfielder Naby Keita, who has not played since the Community Shield because of a hip/groin injury, is also absent for the trip to Turf Moor.

Everton (12) v Wolves (15), 2pm– Live Sky Sports
Jean-Philippe Gbamin is Everton’s only absentee. The Ivory Coast midfielder, signed from German club Mainz for £25 million earlier this summer, is facing at least eight weeks on the sidelines because of a thigh injury. Moise Kean, Alex Iwobi and Fabian Delph will all be pushing for their first Premier League starts for the club after making favourable impressions in the midweek Carabao Cup win at Lincoln.

Wolves boss Nuno Espirito Santo could recall Ruben Neves and Ryan Bennett to his XI after the pair were named on the bench for Thursday’s Europa League win over Torino. Nuno is unlikely to make wholesale changes, though, and Matt Doherty will be assessed as he continues to regain match fitness following a summer knee injury.

Arsenal (3) v Tottenham (7), 4.30pm – Live on Sky Sports
Arsenal have Mesut Özil available for the north London derby. The Germany playmaker has yet to feature this season due to safety concerns and then illness, but he has trained all week. Rob Holding (knee) is back in training but will not feature while Hector Bellerin (knee) and Kieran Tierney (groin) will return to training after the international break.

Tottenham are without record signing Tanguy Ndombele due to a thigh issue. Right backs Juan Foyth (ankle) and Kyle Walker-Peters (hamstring) are out and possible stand-in Eric Dier (hip) is a doubt. Ryan Sessegnon is nearing a return from a hamstring injury but is still waiting for his first Spurs appearance.