Klopp reaping rewards of his energetic makeover of Liverpool 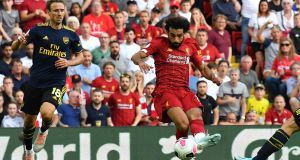 Talk of the “Liverpool way” long preceded Jürgen Klopp’s appointment but, much as the club has been rejuvenated since his arrival, so has an ethos been reinvented. “Our identity is intensity,” said the German. Gérard Houllier and Rafael Benítez, who preached control, may not recognise this variant of Liverpool but, more than most, Arsenal can testify to the effectiveness of Klopp’s energetic makeover.

“They are a fantastic team when they have rhythm,” said David Luiz, before narrowing in on the same word: “They play with intensity. They never stop.” Perhaps Arsenal were not beaten as much as frazzled, their decision-making warped by Liverpool’s relentlessness. Poor choices have pockmarked David Luiz’s career but the two that came in 10 second-half minutes, tugging back Mohamed Salah to concede a penalty and then careering towards the Egyptian only to miss him when he sprinted clear to score his second, may have been the product of Liverpool’s unremitting running. Perhaps physical tiredness brought mental fatigue. Goals were the result of intensity.

“The tempo we put from the beginning was incredible, really incredible,” Klopp added. “The opponent of the quality of Arsenal, you have to break somehow: break them physically.” As ever, Arsenal were broken at Anfield: perhaps not as badly as in the 4-0 and 5-1 eviscerations of their last two visits but to such an extent as to call into question Unai Emery’s claim that he feels “positive because the stature of the team is growing”.

That Liverpool had 25 shots and 49 touches in the Arsenal penalty area suggested this could have been another hiding. “The problem was our movements in the box were not clear enough,” said Klopp. “That’s why we maybe couldn’t create enough chaos in the box, but with 80 per cent of the game I am completely happy.” If pressing, as he once said, is the best playmaker, creativity comes from chaos, invention from exhaustion.

The concern is whether Liverpool will drain themselves, sapping their strength through their intensity. “No, no,” Klopp said. “We are well prepared. We use every second of pre-season to be ready. That is why we were so tired in pre-season. The human body doesn’t need eight weeks to come clear, it’s not like this.”

Which is just as well, given Liverpool’s front three spent much of the summer at the Copa América or the Africa Cup of Nations. Klopp plans to rotate his midfielders but finds it harder to omit his favourite forwards. Sadio Mané’s 2018-19 season only finished on July 19th and he featured in Liverpool’s opening league game against Norwich on August 9th.

“We try [to rest him],” he explained. “I did today – I took him off, and if I am 100 per cent right then Sadio doesn’t have to go away with his national team after Burnley which will help him.”

Mané has been a past scourge of Arsenal. On Saturday, Salah assumed that mantle. “Maybe without that penalty it is different,” Emery added. “It killed the game,” said David Luiz, whose booking for his part in that incident deterred him from stopping Salah when he scored again: “You make a foul and put the team with 10 men, it is even worse.”

Perhaps, for an Arsenal defender, Anfield embarrassment is a rite of passage. If the newcomer David Luiz was hired to alter that, he recognises change is needed. Arsenal have conceded 51 league goals in each of the last two campaigns. Brendan Rodgers’s Liverpool are the only team breached 50 times to finish in the top four in the last 17 seasons, though David Luiz suggested his ambitions are set higher than that.

That has certainly been Klopp’s ethos, with the gegenpressing Roberto Firmino doubling up as the first line of the defence, the two most creative full-backs in Europe and Joël Matip having scored two goals before the end of August. That intensity has resolved the identity crisis of the Liverpool Klopp inherited. “The intention was to be us,” Klopp added. “Just be us.”