St Patrick’s win on the road, Waterford draw with Derry thanks to stoppage-time penalty 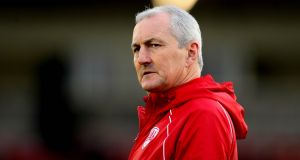 Cork City have now gone six Premier Division games without a win after they couldn’t break down Sligo Rovers at Turner’s Cross.

While the visitors had the better of the chances in the first half, City were on top in the second period and created a number of opportunities.

Just after the hour-mark, Karl Sheppard crossed for Graham Cummins but he couldn’t find the target, then substitute Dáire O’Connor fired into the side-netting after Garry Buckley played him on the right.

Sligo had made a lot of running in the first half, with Ronan Coughlan and Kris Twardek linking well. Coughlan shot over early on while Mark McNulty was quick off his line on 22 minutes when he tried to play in Twardek. At the other end, Cummins had a good chance but he cleared the crossbar.

Sligo’s Coughlan - formerly of City - also had an effort come off the outside of the post from a tight angle, it was a brief interruption to the home team’s flow. From an O’Connor cross, Garry Buckley’s header was saved by Mitchell Beeney and substitute Darragh Crowley was unable to turn the loose ball in, his effort deflected for a corner.

Then, on 82 minutes, Shane Griffin’s crossfield delivery was controlled beautifully by Cork’s third substitute, Darragh Rainsford, but he shot straight at Beeney.

There was one other late opportunity, Rainsford’s corner was met by Buckley, but he headed wide and Sligo held out for the draw.

Winless Finn Harps remain rooted to the bottom of the table as St Patrick’s Athletic notched up only their second win on the road thanks to a first half strike from Conor Clifford and a disputed second half penalty from Mikey Drennan in Ballybofey.

Played before the smallest crowd of the season at a sun-kissed Finn Park, the highlight of the opening quarter was a Caolan McAleer strike which clipped the top of the visitors’ crossbar.

St Pat’s almost took the lead on 27 minutes when Rhys McCabe squared the ball from a free to Clifford whose low drive smacked off the foot of the post.

On 34 minutes, in a similar move, but this time from a corner, McCabe found the unmarked Clifford, some 20 yards out, and he drove the ball low and hard into the bottom left hand corner.

Harps upped the tempo after the break but St Pat’s made it 2-0 on 68 minutes after they were awarded a controversial penalty when Keith Cowan was adjudged to have fouled Gary Shaw.

Harps’ assistant manager Paul Hegarty was sent off for his protests from the sideline before Drennan stepped up to score from the spot.

Shane Duggan pinched an unlikely point for Waterford against Derry City by converting a stoppage-time penalty.

After Waterford started the better of the sides, with Aaron Drinan harshly adjudged to be offside when heading home on 13 minutes, Derry bossed the remainder of the half.

David Parkhouse was the centre of their threat, firstly seeing his shot hacked off the line by Georgie Poynton before somehow missing from six yards out.

Jamie McDonagh had created that opportunity by slipping past JJ Lunney on the right and he once again got the better of the makeshift left-back for the breakthrough three minutes before the interval.

Parkhouse was also the recipient this time with the low cross, and the Northern Ireland Under-21 striker smashed his first-time shot past Matt Connor from eight yards.

Rather than build on that lead, however, Derry allowed an off-colour Waterford a chance to equalise on 62 minutes. Half-time substitute Izzy Akinade took it with aplomb, darting away from Bastien Héry’s pass to stroke the ball past the advancing Peter Cherrie.

Darren Cole thought he had leapt Derry into third when his curling 20-yarder found the top corner but McDonagh’s foul on Drinan inside the box allowed Duggan to score for the third successive home game and earn a draw.