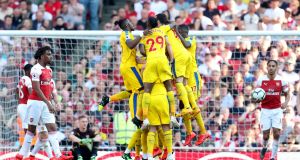 This was supposed to be the banker. The relatively easy one, at home against a team who had hit the magic 40 points and would be forgiven to have sandals and sunglasses at the ready. Of all the hurdles lined up between Arsenal and their aspirations to reclaim a Champions League position either via the Premier League or Europa League, this was supposed to be straightforward. How wrong could you be.

If Unai Emery was lulled into thinking he could afford to over-rotate, that notion was obliterated as a combination of Arsenal’s incohesion and Crystal Palace’s determination injected the afternoon with a pressure that left its burning mark. Roy Hodgson’s team capitalised on an underpowered Arsenal line-up and wreaked havoc with their power from set pieces. Arsenal’s ten-game winning streak at the Emirates disintegrated at a costly moment.

Palace went ahead in the 16th minute, punishing Arsenal with ridiculous ease. Christian Benteke ran into the box blissfully unattended as Luka Milivojevic floated the ball in, and the collective lack of awareness in the Arsenal defence was startling. It allowed the striker to nod his first goal of the season - first for almost an entire year - past Bernd Leno.

With this match crammed in between two clusters of away games, Emery seemed to be banking on Arsenal’s home form as some form of guaranteed safety net.

It evidently made him confident enough to pick a riskily rotated side. But a midfield which included the lesser spotted Carl Jenkinson at wing-back and Mohamed Elneny making his fourth Premier League start this season meant they lacked noticeable fluency at the heart of the team. Arsenal were jumpy and unsettled.

They were so out of sorts it required Alexandre Lacazette to track back to the edge of his own box to dispossess Palace as the visitors pinged the ball around their box hunting for another opening.

Emery had pinned his hopes on the power of a strong and experienced front line but getting presentable opportunities to them was not so easy.

Initially it fell to others. Elneny ballooned a shot high into the Clock End. Shkodran Mustafi jutted a header over the bar from a neat set piece routine.

The home crowd became fractious, worrying about the stakes which had been made even more obvious with Tottenham and Manchester United dropping points this weekend. Their angst grew as Arsenal were denied a penalty shortly before half-time. Sead Kolasinac planted a cross towards goal which struck Aaron Wan-Bissaka on the arms. Jon Moss was surrounded by appealing Arsenal players but gave nothing.

Palace had time for another dangerous flurry before half time which required Leno to make three saves in the same move.

Emery made a double change at half time to try to repair some of the damage. The improvement was immediate. Arsenal wove their finest move of the match just after the restart and threw off the shackles to equalise.

The goal belonged to Mesut Özil. The playmaker was the architect, finding Alex Iwobi in space. The move flowed on to Lacazette, whose deceptive pass was perfect for Özil. The finish was straight out of his personal playbook - dinking the ball in by chopping it into the ground first.

Back came Palace, aided by some more chronic Arsenal defending. Another set-piece was hoicked in and Mustafi inexplicably stalled like an old tractor. Wilfried Zaha unsurprisingly didn’t stop in sympathy and calmly guided the ball past Leno. Palace inflicted even more damage from another dead ball. Scott Dann’s header flew at James McArthur at such speed he barely had time to react as the ball went off his head in.

Arsenal were shellshocked and spent a few minutes taking it in before they roused themselves to try to comeback. Pierre-Emerick Aubameyang took it upon himself with a mazy run, and when a lucky ricochet off Joel Ward presented the ball back to him he finished crisply.

There would be no more, as Vicente Guaita clawed away Özil’s cross, Iwobi shot straight at the Palace keeper, and Lacazette wondered if he might have merited another penalty. Arsenal now travel to Wolves and Leicester with it all to do to stay in the top four chase. - Guardian