City fans reminded of the decades when football meant heartbreak 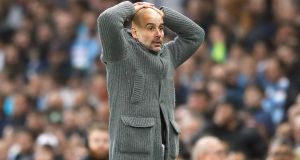 Manchester City manager Pep Guardiola reacts as he discovers Raheem Sterling’s late goal against Tottenham, that would have sealed his side’s progress to the semi-final, was ruled out for offside. Photograph: Martin Rickett/PA

If you are a Manchester City fan, then you have probably become accustomed to the nifty grey-hooded cardigan which Pep Guardiola has favoured to keep him cosy through the dismal Mancunian winter as he stands sagely on the sidelines watching his billionaire’s club thrash England’s provincial teams in all kinds of darkly beautiful ways.

Because Pep has lost nothing of the sinewy bantamweight grace of his playing days, it’s a garment that looks good on him –- and possibly on him alone.

He was wearing it on Wednesday night, too, when Manchester City played Tottenham Hotspur on what has to go down one of the most mental and thrilling nights that football has given the world; a European night, yes but intrinsically English in its emotions and repercussions.

The key moments of the dramatic final ten minutes of normal time and the five added minutes have already been cast in silver and added to the legendary clips that help to define eras.

But, because this European Cup quarter-final was not on terrestrial television, nothing like the potential audience got to experience the live thrill of watching two football teams that between them created a volatile energy that neither could fully understand or control.

It didn’t matter, in those minutes, whether Manchester United should or should not have gone hell for leather to convince Tottenham’s Mauricio Pochettino to become the club’s next manager or whether Pep is the supreme football magi or has ultimately bewitched the world through attacking audacity and the luxury of having the world’s best players.

For in those minutes, both managers were as clueless as the fans in the stadium as to what would happen next. Both men were locked-in, agitated and only scarcely aware of their behaviour on the sidelines. Their unrest was reflected in the wardrobe changes.

Pochettino, who on this night resembled a dapper snooker player on the professional circuit, ditched his black jacket as the game, over the course of 95 minutes, mercilessly toyed with his emotions.

His hopes soaring after the two early goals, his mind racing through the taut middle part of the game when Spurs were hanging onto a slender away goal advantage and then chasing the game after City smoothly and inexorably reeled them in.

The epic drama of Fernando Llorente’s weird, ugly, priceless goal and then finally the sickening helplessness he must have felt watching his players, dead on their feet, repel and repel and repel City’s late surges until they finally buckled in the 93rd minute.

The most gripping aspect of the entire match was that after Llorente’s goal, the game became reduced to a litany of City attacks and because of the mind-bending unpredictability of the last 90 minutes, it felt as if they were fated to score again. And then, of course, they did.

It was horrible for Spurs that Christian Eriksen, their tidy creative conductor, was the player guilty of crumbling under City’s reckless press and the silkiness of Sterling’s finish seemed to affirm that the result was inevitable; that City had too many good players, too much money, too much Pep. That the weight of Sheikh Mansour’s billions was what made Tottenham finally buckle.

The disallowed goal was pure composure: the coolness with which Sterling allowed the ball to roll across in front of him and onto his left foot caught the essence of Guardiola’s style – clean and precise and perfectly executed.

Afterwards, Pochettino didn’t try and gloss over just how low he felt for the 60-odd seconds when the Etihad Stadium ignited in euphoric celebration. Just down the touchline, Guardiola had quite forgotten himself; he was ecstatic, unburdened; the huge reserve of pressure and expectation he internalizes revealed itself in that celebration like a dragon breathing fire.

But for Pochettino, that minute must have been a glimpse of hell. A team is just a construct; a collection of individuals coached and motivated to play with and for one another. Therefore teams can just die. They can go through an experience so gut-wrenching and soul-crushing that the team becomes irretrievably broken.

Pochettino hinted at this possibility on Thursday when he agreed that losing the game would have been the biggest low of his managerial career, that it would have been a “massive moment emotionally”.

Performing as they did, despite the litany of injuries, against the gilded, moneyed side of the age and still losing in injury time – what could he possibly have said or done to convince those Spurs players that the best moment of their careers had been snatched away from them.

Even as Pochettino was articulating those emotions for himself on the sideline, the realization hit those in the stadium that the goal was under review and then Sergio Aguero was ruled off side. Guardiola, overjoyed just seconds earlier, fell to his knees in true despair. Then, he took off his cardigan.

The drama was so heightened that City’s unstoppable progress in the Premier League suddenly seemed irrelevant and that they were due to face Spurs again on lunchtime Saturday in Manchester an afterthought.

Now, however, that Saturday has come, it represents a fascinating opportunity to see if there is any magic left once these teams rub off each other again. Logic suggests that Spurs can’t possibly combine the necessary elements of creativity, energy, luck and audacity to thwart City again, in Manchester, in the space of just three games.

But that overlooks the fact that Spurs actually lost the game on Wednesday night by 4-3. And it forgets that, for the first time all season, Guardiola’s team must now deal with the grave disappointment and doubt that comes with elimination; that for all their fabulousness, they have failed again to make a serious impression in the European competition.

It may be that Guardiola has never even seen Steve McKenzie’s perfectly struck volley for Manchester City in the FA cup final of 1981, when the blues lost another classic to Ricky Villas’ era-defining goal which closed the scoring at 3-2.

That was a period of more modest dreams for both clubs, defined by the catchy Chas n Dave anthem ‘Ossie’s Dream’, which the Spurs finalists merrily sang on Top of the Pops.

City were the ‘other’ club in Manchester then; destined to bounce into the second division four more times through the 1980s and 1990s; the club’s fans perpetually nostalgic for 1967-68 when they magically and improbably won the league.

Generations of City fans are still caught between the memory of that wistful history and their transformation into the new moneyed elite of the English game.

Wednesday was a vivid reminder for City fans of the decades when football meant heartbreak in one form or another; normal service should be resumed at lunchtime today. But they’ll be edgy now.