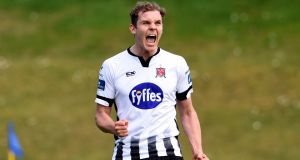 Dundalk’s Georgie Kelly celebrates his goal in the third minute of extra time to give his side a 3-1 victory over UCD at UCD Bowl. Photograph: Ciaran Culligan/Inpho

This, Vinny Perth suggested afterwards, was more like the Dundalk that won the title last year. And while that team at its best would probably have won a game in which they created so many chances by a few more goals, it was certainly an encouraging display for a manager who needs his men to get motoring.

“It felt a little more like us,” said Perth after seeing his side win for the third time on the trot. “We knew they keep the ball well and so we had worked hard all week on pressing them up high. We need to go on a bit of a winning run but I’m happy with today, we are back creating chances and if we keep doing that then the goal will come, I think.”

“That’s three wins, nine points in the last week and I think we are getting back to ourselves,” he said before being asked, essentially, whether Friday’s game against Shamrock Rovers at Oriel is still something of a must-win despite his side’s improvement.

“No, this league is won at big moments and in big games but for us it’s a game that we look forward to; nothing more than that at this stage.”

A couple of dressing rooms away, Collie O’Neill suggested this one had been a bit of a “free shot” for his side and that there will be games over the weeks ahead that will be seen as more of a target.

Like Perth, he saw the pitch as having helped to prevent the home side from playing their own game but he had no complaints really and acknowledged that Dundalk had “fully deserved their win”.

“The pitch aside, they were very good,” he said. “They closed us down early and prevented us from ever really building any momentum.”

That, though, had taken a bit of character from the champions. With less room left for manoeuvre than they would like in terms of their title defence, Dundalk had a jolt early on when the students played right through them from deep inside their own half to score; Yoyo Mahdy eventually finishing coolly after Conor Davis released him into the space between the two centre backs.

“Brian Gartland tried to play offside and someone was in a covering position but we’ll fix that stuff, we’ve always been good at that,” said Perth.

Over the course of what followed, the students sometimes seemed a little too composed under pressure for their own good, though, with Conor Kearns’ defence looking ponderous around their own area at times when a little more urgency was required.

Their 12th minute lead was short-lived with Paul Doyle conceding the penalty, for a foul on Daniel Kelly, from which Pat Hoban equalled the club’s longstanding record for league goals by firing home his 69th from the spot. Michael Duffy then did particularly well for their second five minutes after the break.

They created comfortably enough chances, in truth, to put the game well beyond doubt over the course of the 90 minutes and while they created no more than a couple, the hosts never entirely stopped looking as though they might have one in them against the run of play and so the game did not look entirely safe until the third minute of added time when Georgie Kelly popped up to score against his former side.