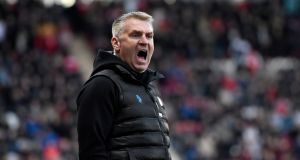 The victory, courtesy of Jonathan Kodjia’s strike after 30 minutes, was a club record 10th successive win — beating the previous record that had been set 109 years ago.

Villa, who have now virtually assured themselves of a place in the play-offs, would have won by a greater margin but for Millwall goalkeeper David Martin who saved from Anwar El Ghazi, Jack Grealish and Andre Green.

Smith said: “If you had asked me 11 games ago would we go and win the next 10 I would have thought you were a little bit crackers.

“The turning point was half-time at Stoke when I got into the players and we have been excellent since then.

“I don’t think until I look back on it I will realise what we have actually done because my focus is still on getting promoted.

“It is a historical great football club and to be the first manager to have achieved it is something special but we want to continue it.

“The players have been magnificent throughout. They have set standards and are taking great ownership of what they are doing at the moment.

“We are hoping there are still five more games left for us this season and we are hoping we can win all five.”

Millwall remain deep in the relegation fight and their manager Neil Harris was disappointed by the goal that they conceded.

Harris said: “First and foremost we lost the game so I am a little bit dejected at this stage of the season.

“We should have had our noses in front and then it could have been a different game.

“The goal is poor by us and I will make no bones about that. We have a throw in and lose the first contact, the second ball, miss a tackle and then we open up against Villa who pick the right end product. The goal was avoidable so there is frustration.”

Millwall now face back-to-back home games against Stoke and Bristol City and Harris has targeted them to secure Championship survival.

He added: “Our season can twist and turn on the back of Stoke and Bristol City.

“They are two good sides but we have to be better than them and that is the challenge for the players.

“Stoke coming to The Den, an ex-Premier League team with a big following, should be right up the street of my players and my fans and we have to make sure that it is a strong, hostile place on Saturday.”