League of Ireland 2019: Club-by-club guide to the season 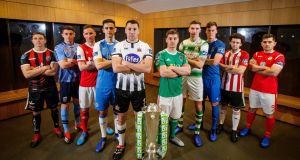 Keith Long’s side took a while to get going last season, then ended up having a spell in which they looked a match for anyone on their day. After a bit of upheaval, the first might apply this time around, with the key question being whether they can get to the second stage again.

Shane Supple, Daniel Kelly, Dan Casey and JJ Lunney have all departed and while Long has recruited replacements with an awful lot of potential it may be the summer before we have really got a sense of what the slightly reshaped side amounts to. Should be solid in the end, though, and might well manage another cup run.
Title odds: 50/1. Prediction: 6th

After having been the only serious challenger to Dundalk for the title over the last few years, John Caulfield has been seeking to dampen expectations this time with the manager pointing to the loss of so many experienced players. Still, anything less than second place would still be a disappointment.

Kieran Sadlier, Steven Beattie and Jimmy Keohane will all be missed and much, inevitably, will come down to how the new faces fit in. To judge by the President’s Cup, Kevin O’Connor is set to make a big impact while Daire O’Connor and Dan Casey certainly have the potential to do so. If the goals flow, City could be right up there, but there looks to be a little less depth and that might catch up on them over the course of the campaign.
Title odds: 5/1. Prediction: 2nd

There has been an awful lot of movement since the end of a campaign that ended pretty dismally for Derry City with 15 players signed as the club target something akin to a fresh start. Given their experience, Ciaran Coll, Patrick McClean and Barry McNamee all look like good signings, but there are an awful lot of less well-known quantities. The Premier Division will be a step up for Greg Sloggett, and David Parkhouse, though big and strong for a teenager, needs to show he can hold his own against League of Ireland defenders.

Declan Devine talks about signing players with a point to prove but he has a decent sized one to make himself. They should improve on eighth, especially if new arrival Michael McCrudden maintains his Irish League form, but a lot will depend on how well some of the others settle in.
Title odds: 33/1. Prediction:7th

With the bulk of last season’s all-conquering first team still safely in place, it is easy to see why Dundalk kick off the new season as firm favourites to retain their title, but clearly an awful lot depends on Vinny Perth’s ability to fill Stephen Kenny’s shoes. A slow start just might put everyone’s nerve to the test.

Failing that, the squad might actually be stronger than last year if Daniel Kelly progresses and Sean Murray settles. The latter looked a real talent in his Championship days but that is no guarantee. If Pat Hoban stays fit and keeps scoring, they will take some overhauling.
Title odds: 5/4. Prediction: 1st

The return of Ollie Horgan promises plenty of sideline drama during the months ahead but the Harps boss will probably be happy enough to see just about everyone tipping his side to go straight back down.

If they are to prove the pundits wrong, they need a dramatic improvement in their home form of over two years ago when they were relegated having taken just 13 points from 16 games at anything but fortress Finn Park. Horgan made some decent signings midway through last season as the club looked to push on for promotion and Sligo veteran Raff Cretaro arrives now along with the likes of Daniel O’Reilly and Australian defender Harry Ascroft. It is likely to be a slog, though.
Title odds: 500/1. Prediction: 10th

Having added quality to an already decent midfield the Dubliners now need to add consistency. The club have kept faith with Stephen Bradley but the very least required this season is that they are on the right side of any gap that might materialise towards the top of the table. A cup run wouldn’t go amiss either, of course.

Jack Byrne will command a fair bit of attention and it will be interesting to see whether the Dubliner, once the next big thing at Manchester City, can start to really impress again. Orhan Vojic’s impact is even harder to predict but the hope will be that the Austrian adds significantly to the goal tally.
Title odds: 3/1. Prediction: 3rd

A bit more rebuilding was required than Liam Buckley would have hoped after Mikey Drennan and Rhys McCabe both defected to Richmond Park, but the former St Pat’s manager says he is happy with the squad he has put together given the budgetary constraints.

The likes of Dante Lererock and Romeo Parkes are unknown quantities but Daryl Fordyce  brings an awful lot of Irish League experience and striker Ronan Coughlan arrives from Cork City with a bit of a point to prove. The football should be good but just a solid mid-table finish would be something of an achievement.
Title odds: 66/1. Prediction: 8th

There is a lot of talk about the Inchicore club after the signings they have made and it has been interesting to see a few people predicting a top-three finish. Certainly they should be a good deal stronger than last season with the likes of Mikey Drennan, Rhys McCabe, Dave Webster and, of course, Chris Forrester, adding quality in key areas.

If it all clicks straight off, then they might well be nipping at the heels of Cork or Shamrock Rovers but it will require a huge tightening up of things at the back by a team that is likely to still have a strong attacking emphasis. There were certainly times when Bray suggested they could strike the required balance under Harry Kenny but the ship hit the rocks there before we could be sure. It will be interesting to see what he achieves here in a more stable environment.
Title odds: 7/1. Prediction: 4th

Having reaped the benefits last season of having kept roughly the same group of players together for a few years, Collie O’Neill now takes the bulk of that same side into the Premier League where UCD will have little option but to try to stay clear of trouble by winning games with a bit of style.

Daire O’Connor and Greg Sloggett have gone from last year’s title-winning side but Gary O’Neill and Liam Scales are among the experienced players to stick around. It will be interesting to see whether Neil Farrugia can light up games at this level with his play out on the left wing, or if Conor Davis can, after a great tail-end to last season, deliver up front. Richie O’Farrell, who joins the group from St Patrick’s Athletic, is perhaps the most notable addition, but the loss of Evan Osam to injury this week will be a blow.
Title odds: 500/1. Prediction: 9th

After their sensational start to the season last year, Waterford got a greater sense of just how hard it is to sustain a challenge at the very top of the Premier Division and it is difficult to see them advancing significantly on where they ended up at the end of last season.

Bastian Hery will again be driving things from central midfield while Damien Delaney arrives with the hope of making a mark in what will be his last season. Their season may hinge on how well the likes of JJ Lunney and Zack Elbouzedi shoulder the responsibility of being important players in a team pushing for Europe again.
Title odds: 25/1. Prediction: 5th

Ireland midfielder Conor Hourihane set for Swansea loan spell 14:25
Richard Keogh has joined Huddersfield until the end of the season 13:25
Jordan Henderson takes up ambassadorial role in support of NHS 13:05
Mason Jones not interested in being the Welsh Conor McGregor 12:01
Charles Byrnes’ licence withdrawn after runner ‘nobbled’ with a sedative 12:52