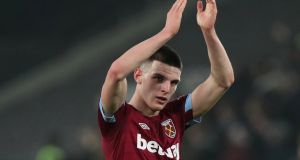 Mick McCarthy may have wished Declan Rice well now that the 20-year-old has finally resolved to pursue an international career with England but the news is obviously a blow to a manager who made no secret of his desire to have the West Ham midfielder at the very heart of his Irish team.

Rice’s announcment, issued through his social media accounts, ended months of speculation and, the player insisted, soul searching . After several months of deliberations, he said, and after having consulted extensively with family members, friends and others within the game, he had called both McCarthy and Gareth Southgate to inform them of his decision.

He will, he said, be writing to Fifa to request his international transfer, the start of the formal process of him becoming eligible to represent the country of his birth.

Rice, who played three senior international games last year for Martin O’Neill, said that as he has “equal respect for both England and Ireland . . . the national team I choose is not a clear-cut simple selection,” but, he insisted, “it is a personal decision that I have made with my heart and my head, based on what I believe is best for my future”.

The midfielder said that he accepts Irish supporters will be disappointed but expressed the hope that they will accept that he has “made this decision with honesty, integrity and the full support of my family”.

Before departing the Ireland job late last year, O’Neill had placed a lot of hope in Rice’s father, Sean, who he felt wanted his son to declare for Ireland, where both of his (Sean’s) parents had been born. After making his senior debut in Turkey, Declan said that he had been deeply affected by thought of how proud his grandparents would have been as the national anthems were played.

More recently, McCarthy brought Robbie Keane to meet the player in the hope of persuading him of how important the midfielder was to him. The difficulty was that as he continued to progress, at a fairly remarkable rate, in the Premier League, that became something of a given and his potential to make an equally significant impact with England became entirely clear.

He is not, he maintains, taking anything for granted but says that it was best to announce his decision now so as to put an end to the speculation. “In football, and in life,” he concluded, “I have always tried to be completely honest and true to myself and my family at all times, and that is what I will continue to do.”

In his statement, issued through the FAI, McCarthy said that: “Declan Rice rang me today and told me he has decided to give it a go with England. Good luck to him, it is his decision and his decision alone and I wish him well with his international career in the future.

“When I met Declan and his family, along with Robbie Keane last November, I told Declan that I would be delighted if he opted to stay with Ireland having won three senior caps and represented us so many times at underage level.

“That is not to be. I never got the chance to work with Declan so he is not my player and won’t be now that he has made up his mind.

“We know Declan’s decision now and we continue to plan for the games next month.”

McCarthy had previously made it entirely apparent that he had hoped to build a team around Rice. He does, of course, have other options but there is no getting away from the fact that none looks quite as good right now and so the player’s decision is a blow some six weeks before Ireland’s first game of the European Championship campaign.

Former Ireland international Kevin Kilbane, a vocal critic of Rice while the West Ham player was considering his future, asked on Twitter “If you’re a ‘proud Englishman’ then why play for us in the first place?”

Speaking on Virgin Media, Kilbane added: “As soon as he turned down the call-up [for the Nations Cup last September] that was it. I personally felt he didn’t deserve another call-up after that. Once that decision was made in his mind, to turn the call-up down from Martin O’Neill, he knew full well that had he played in any of those Nations League games that he wouldn’t have been eligible to play for England.

“He then, at that stage, considered his future was going to be part of Gareth Southgate’s squad. In my mind I don’t think Mick McCarthy or Martin O’Neill needed to go and see him, a simple phone call would have sufficed. If he doesn’t want to play, thank you very much, you concentrate on the players you have available to you.”

“This afternoon I telephoned both Mick McCarthy and Gareth Southgate to inform them of my decision to submit a written request to Fifa for the transfer of my international registration from the Republic of Ireland to England.

“This has been an extremely difficult decision and, in all honesty, not one I ever expected to be making at this stage of my career. So much has happened, so quickly, in the past couple of years, from progressing through the West Ham United Academy to making my Premier League debut at the age the 18 in May 2017 and then being named in a full international squad just two days later.

“In recent weeks and months, I have discussed the situation with the people who mean the most to me. My parents, my family, my girlfriend and my closest friends. I have also spoken to Martin O’Neill and Mick McCarthy, Gareth Southgate and to friends and colleagues within the game whose opinion I respect. I am truly grateful for the support I have received in leading to this decision.

“Like so many people around the world, I consider myself to be of mixed nationality. I am a proud Englishman, having been born and raised in London. However, I am just as proud of my family’s Irish heritage and my affinity and connection with the country.

“I have equal respect for both England and Ireland and therefore the national team I choose to represent is not a clear-cut, simple selection. Particularly for a young lad who never dreamed of being in this position.

“Ultimately, it is a personal decision that I have made with my heart and my head, based on what I believe is best for my future.

“I fully accept that some Irish supporters will be disappointed with my decision, and that everyone has different opinions in regards to the rules around international representation. However, I hope people can understand that I have made this decision with honesty, integrity and the full support of my family.

“I would like to thank Mick McCarthy, Martin O’Neill, all of the coaching staff and everyone associated with the FA of Ireland (with special thanks to Mark O’Toole), not only for their support and understanding throughout this period, but for the part they have played in my development as a young player.

“My pride at wearing the Irish shirt was always 100 per cent genuine. It was a great honour for myself and my family and something I will always cherish.”

“I would also like to make it clear that, in requesting to transfer my national team representation, I am not taking for granted a call-up to the England squad or making any assumptions about my future international career. However, out of respect for the Republic of Ireland, I felt it was right to announce this decision now and put an end to the speculation.

“I am still only 20 years old and there is a long road ahead of me. For now, my focus remains entirely on establishing myself as a Premier League player with West Ham United and working as hard as possible to improve and be successful.

“In football, and in life, I have always tried to be completely honest and true to myself and my family at all times, and that is what I will continue to do.”