Pochettino’s side take a massive advantage to Germany 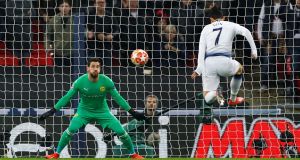 Tottenham’s Son Heung-min scores their first goal in the Champions League round of 16 first leg against Borussia Dortmund at Wembley. Photograph: Eddie Keogh/Reuters

These are the moments when it can feel difficult to remember how Tottenham did not sign anyone in the last transfer window, or the one before that, have Harry Kane and Dele Alli among their absentees and are not even playing in what they can genuinely call a home stadium.

Once again, Mauricio Pochettino’s players have shown their qualities. They keep doing it, rising to the challenge, absolutely determined to show they can outdo teams with bigger reputations and more experience of football at its highest level.

Their reward here came in the form of the three second-half goals that have put Pochettino’s team in a position of strength in this two-leg tie. Son Heung-min was first on a night when his hard running and intelligent forward play created all sorts of problems for Borussia Dortmund. Jan Vertonghen, a revelation in his left wing-back role was next and, finally, it was the substitute, Fernando Llorente, heading in a corner to give Spurs the kind of lead that barely seemed imaginable during a problematic opening half.

The last two goals came in the 83rd and 86th minutes, turning a narrow lead into a resounding one. Spurs had dominated against a team who would like to see themselves as Germany’s champions-in-waiting and, from here, it would need a dramatic collapse if they are to relinquish this position when the sides renew acquaintances on March 5th.

By that stage, Kane and Alli should be fully recovered from the injuries that have deprived Spurs of two of their more important performers. Among Kane’s many attributes, he loves the big occasion, under the floodlights, with the Champions League anthem playing. Alli is the same and Spurs may need their leading men baring in mind Dortmund are holding off Bayern Munich, the Bundesliga champions in each of the last six years, at the top of the German league.

Dortmund were tough, obdurate opponents, quick to the ball, strong in the tackle, with the kind of self-assurance probably best epitomised by the response of their goalkeeper, Roman Bürki, after he had miscontrolled a simple backpass and momentarily let the ball go through his legs. To prove his point, Bürki dinked his pass to the nearest defenders with an almost absurdly casual chip over Lucas Moura. Risky in the extreme, but carried out with the deftness of a champion golfer clipping a delicate sand wedge on to the green.

In Jürgen Klopp’s time as their manager, Dortmund’s players were famous for the way they never gave their opponents any peace on the ball. These days, they do not tend to pressure with the same ferocity, even letting Spurs carry the ball unchallenged across the halfway line. But the players in yellow still have a phenomenal work rate, defending with great togetherness, counterattacking at speed and taking encouragement, undoubtedly, from the number of times they threatened Hugo Lloris’s goal.

Not that Dortmund could always be so relaxed. The best moment for Spurs in the first half came early on when Moura flashed a searing volley just wide of Bürki’s left-hand post. Spurs have tried desperately to make sure Kane’s absence does not have to be a grievous setback and Son, in particular, set off as if he wanted to reinforce that point, making himself a nuisance with his elusive running and busy approach.

Overall it was Dortmund who had the better of the opening 45 minutes and, as the watching Gareth Southgate will have noted, Jadon Sancho was prominently involved in some of their better moments. It was from one of Sancho’s crosses that Dan-Axel Zagadou had a far-post header for what was probably Dortmund’s best chance of the first half.

Lloris saved Spurs on that occasion, just as he had earlier on when Juan Foyth committed the centre-half’s sin of losing the ball inside his own area and Christian Pulisic tried to catch out the goalkeeper with a left-foot shot towards his near post.

The problem for Dortmund was that they could not handle Son’s ability to create danger and, more than anything, the way he had been given a licence to roam. Son was playing, in effect, as a centre forward but one who drifts to both sides or even drops back into his own half to collect the ball. He was four roles in one. It made him a difficult player to mark and, if there was nobody near him, he always wanted to go forward.

Two minutes into the second half, that appreciation of space had taken him into the penalty area as Vertonghen tussled to win the ball on the left. Achraf Hakimi, Dortmund’s right back, had slipped the ball through Vertonghen’s legs in the first half for a perfectly executed nutmeg. Now he tried it again but this time he was inside his own half and there were other players crowding him out. Spurs retrieved the ball and when Vertonghen looked up he could see Son shouting for the ball. Vertonghen’s delivery was perfect and Son’s volley flew into the net.

After that, Spurs poured forward in the search for more goals. Vertonghen side-footed his one past Burki after a cross on the right from Dávinson Sánchez and three minutes later Llorente applied the decisive touch to Christian Eriksen’s corner. – Guardian