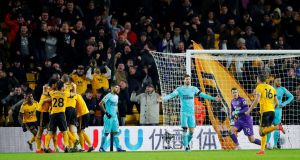 Rafael Benítez must hate it when the fourth official holds up the board for added time against Wolves. Just as Matt Doherty had headed a winner at St James’s Park in the 94th minute in December, so Newcastle were again undone by a last-gasp goal as Willy Boly headed in Adama Traoré’s cross in the fifth minute of stoppage time when four minutes had been signalled.

Boly was able to beat Martin Dubravka in an aerial duel at the back post but, once he has calmed down from the disappointment, the Newcastle manager should still take great heart from the resolve his side displayed before and after Isaac Hayden’s rare goal. They are now a point above the relegation zone.

The uneasy peace between Benítez and the Newcastle United hierarchy could yet lead to happier times. Not only has the manager been able to find a formula that has also brought victories over Cardiff City and Manchester City, but he was also able to introduce a £21m attacking presence as Miguel Almirón came off the bench to applause almost as rapturous as that greeting Hayden’s first goal since October 2017.

Benitez may have been backed in the transfer market but he has made it plain talk of his future must wait till the summer. But at least a thaw seems to be in evidence.

With three points separating the six clubs above 19th-placed Fulham, Newcastle were never likely to be setting up too brazenly. Benítez opted to start his new record signing Almirón on the substitutes’ bench, offering the XI who lost narrowly to Tottenham in their previous match the chance to impress again.

Wolves, with five wins from their previous seven games, were also unchanged as they sought a club record. Victory would bring them their best points tally in a Premier League season – in their fifth campaign at this level – with 12 games remaining.

Firstly they had to ensure they avoided the kind of underwhelming performance they had mustered against other bottom-six sides such as Crystal Palace and Huddersfield. Newcastle were set up to frustrate, with five at the back, a holding midfielder and Ayoze Pérez just off Salomón Rondón.

Benítez’s similarly conservative approach in the corresponding home fixture had led to a strangely slow-burning game eventually won for Wolves by Matt Doherty’s stoppage-time header but punctuated by no little ill-will in December.

This time, there was a sense that with the shackles off, Wolves could play with more devilment. Raúl Jiménez was just about to pull his increasingly happy trigger when Christian Atsu intervened – legally, referee Graham Scott correctly decided – and then the No9 slashed Doherty’s pullback over the bar from eight yards out.

Jiménez, with eight goals in his last 11 starts in all competitions, was seeking to become only the second Mexican to reach double figures in the Premier League, after Javier Hernández. The manner in which he ran the long way past DeAndre Yedlin and Fabian Schär before unleashing a shot that Martin Dubravka was happy to save was indicative of his soaring confidence.

Newcastle finished the half the stronger, however. Rondón had one header easily saved before running on to Pérez’s clever angled pass and getting off a shot that only went wide after Conor Coady’s tackle. That was the 11th time Newcastle have finished the first half at 0-0 this season but Wolves set about changing the status quo by stepping up the pace at the start of the second half.

João Moutinho has been in imperious form recently, with five assists in his three previous league games, and it was from his corner that Wolves should have taken the lead.

Jota’s near-post glancing header bypassed Dubravka but though Doherty, stooping down, looked certain to head over the line, Sean Longstaff did brilliantly to put him off, and the ball flew over the bar.

Instead it was Newcastle who broke the deadlock, and from an unlikely source. It is 16 months since Hayden last scored but, when Willy Boly was caught on his heels as Fabian Schär strode forward and played a pass down the inside-right channel, the midfielder showed no hesitation as he shot powerfully home at the near post, exposing Rúi Patrício’s early decision to dive the other way.

Hayden would be an unlikely hero. Having had requests to leave rejected in each of the last two transfer windows, to move south to be nearer his infant daughter, he may just have played a crucial part in Newcastle’s bid to stay up.

Spirits of the travelling Geordie hoards were raised even further when Almirón, was introduced.

The last time Wolves scored at least three goals in four successive top-flight games was back in January 1961. Having been so prolific in recent matches, Nuno Espírito Santo would ultimately have been delighted with the single goal here. – Guardian service