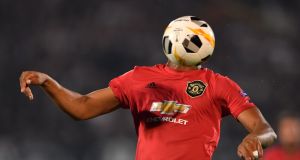 This was hardly pretty but Manchester United will not care as Ole Gunnar Solskjær’s team head Group L following the win at the Partizan stadium, a first in more than a month in all competitions. It was United’s first away victory since March.

Savo Milosevic’s Partizan Belgrade will rue a lack of goal threat as they had chances and United, again, failed to score more than once. That is a 22nd time in the past 25 outings.

The stadium had an old-school feel. Firemen were stationed behind the goals in case of flares, a banner of Al Capone was displayed, and when the sides trotted out to warm-up the visitors received raucous jeers.

It was certainly a memorable atmosphere in which the 18-year-old James Garner made his full debut. The midfielder, impressive throughout, was one of seven changes made by Solskjær from the 1-1 draw with Liverpool on Sunday, as he retained Harry Maguire – captain for a first time – Marcos Rojo, Aaron Wan-Bissaka and Scott McTominay.

Milosevic drafted in two players from the 1-0 defeat at the weekend: his goalkeeper Vladimir Stojkovic plus Seydouba Soumah, a midfielder.

Sergio Romero was making a rare start in goal and his first action was to miskick a Partizan long ball. In a cauldron of noise United looked to calm the opposition – and fans – by knocking the ball around, then roving down their left where McTominay claimed a first corner.

The same player later missed a golden chance. Juan Mata swung in a free-kick and McTominay had Stojkovic’s goal before him but the header was missed.

Via Jesse Lingard along the right and Brandon Williams down the left United looked as if they could unlock Partizan, the idea being for Mata or McTominay to run on to a ball in behind the defence.

Yet United had to be careful due to the bursts of Takuma Asamo – Phil Jones, Garner and McTominay all having to move to thwart the No 11. Garner was proving confident enough to spray passes wide from his holding berth while also showing an adept reading of the contest.

Starhinja Pavlovic is an 18-year-old centre back considered a prospect here and the way he took the ball from Lingard and glided infield as Partizan controlled proceedings at the half hour mark illustrated precisely why.

When Zoran Tosic, once of United, unloaded at Romero’s goal this was the latest warning to Solskjær’s men that they had become passive. It did wake United. Suddenly Garner, Mata and Wan-Bissaka were combining and Lingard was hitting the goalkeeper’s left post. But Partizan responded via a slick move that had Umar Sadiq firing a shot on to Romero’s left post.

United were about to win a penalty and this derived from their best sequence. It ended with Williams driving into the area and Nemanja Miletic downing him. Despite Sasa Zdjelar standing in front of Anthony Martial before he took the kick, the French striker slotted expertly home.

This came just before the break. The first act of the second half had Sadiq making a mug of Maguire near halfway and drawing a foul from Jones. This was close to the area but Bibras Natcho could not beat Romero with the dead ball.

Moments later Jones appeared to get away with a push on Soumah – this was inside the danger zone and Xavier Estrada Fernández had clear sight but the referee gave a goal kick.

Soumah next gave Maguire another hounding, leaving him trailing and United, again, were lucky not to concede. Partizan were enjoying requisite possession but lacked the killer edge.

On the hour Solskjær took off Martial and Wan-Bissaka for Marcus Rashford and Daniel James, United moving from a back three to four. Now came two penalty appeals turned down by Fernández – to Partizan fury. First, they believed Williams handled, then that Sadiq had been impeded, but United escaped.

They did, too, when a last-ditch Jones challenge conceded a corner when an equaliser appeared favourite. Romero was next – to save an Asano header – then Maguire, who cleared, as Partizan ended the far stronger. By the close this was a squeaky win yet fitting result for United on a day when the club had held a ceremony on this pitch to remember the fallen of Munich.

Next up for Solskjær’s side is Sunday’s trip to Norwich City. Given their inconsistency who knows how they will play and what the result will be at Carrow Road. Still, a point against Liverpool and now this victory, represents a good few days for the manager and his team.

1 Seán O’Brien: Anger over my parents’ break-up never left me
2 Madness or defiance? The GAA is taking a huge gamble in staging Championships
3 Dan Martin keeping it day-to-day as Vuelta proves challenging for riders
4 Gibson-Park, Earls and Kelleher all in race to make Ireland’s French finale
5 Ireland 50 Italy 17: Ireland player ratings
Real news has value SUBSCRIBE
Crossword Get access to over 6,000 interactive crosswords