Champions come from behind after Graydon is sent off in second half, Cork edge past UCD 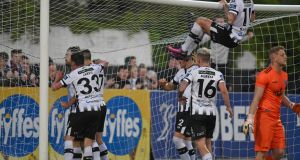 A thrilling game looked set to end in a 1-1 draw but, with the game in the fourth minute of stoppage time, substitute Dean Jarvis was upended in the box by Andy Lyons and Hoban beat James Talbot for the third time this season to keep Dundalk top of the league.

Bohs pulled ahead with less than two minutes played when Robbie McCourt’s pass caught the Dundalk back four square and even though he was stood up by Gary Rogers, Danny Grant still managed to find the net from an acute angle.

It was one-way traffic after that and Dundalk should have leveled things in the 17th minute but Michael Duffy sliced his effort horribly wide. Bohs could have gone in two ahead at the break when Ryan Swan hustled Sean Gannon into a mistake outside his penalty area, but the Bohs striker couldn’t apply a clinical finish.

Bohs substitute Ryan Graydon lasted a total of 13 minutes before he received his marching orders from Derek Tomney. Booked just seconds after the restart, the 20-year-old left his team to play 36 minutes with ten men for a silly tackle on Daniel Cleary which led to his departure.

Dundalk went for the jugular with Perth dispatching Georgie Kelly to play alongside Hoban in the front line and the move paid off in the 66th minute when the striker buried a loose ball past Talbot to make it 1-1.

Talbot made a brilliant save to deny Hoban with four minutes to go and Bohs thought they snatched it when Danny Mandroiu jinked his way to the byline but Robbie McCourt couldn’t sweep his cutback home. Play switched to the other end and when referee Tomney blew for the spot-kick, Hoban made no mistake with his sixth penalty of the season.

Teenager Cian Bargary enjoyed a memorable league debut as he scored the only goal of the game to get Cork City back to winning ways at the UCD Bowl.

On the pitch just six minutes, 18-year-old winger Bargary got the final touch to head the ball over the line to decide this fitful encounter on 72 minutes.

Cork move up to sixth place while an eighth successive defeat keeps UCD rooted to the foot of the table.

UCD’s three at the back looked a little unsure of itself early on with Sheppard and James Tilley working Kearns.

A better save was needed on five minutes as Garry Buckley met a Boylan cross with a downward header.

Sheppard then burst in on the right to keep Kearns busy with a low drive.

UCD passed their way into the game with Cork ’keeper Mark McNulty having to make the stop of the first half from a Sean McDonald shot after he slipped to gift the ball away.

Cork the had a let off three minutes before the interval when Paul Doyle fleshed a header wide from Neil Farrugia’s cross.

It remained an even contest into the second half with Sheppard’s flick header bringing a fine save from Kearns before the key moment of the game arrived as Bargary began his League of Ireland career in the best fashion possible.