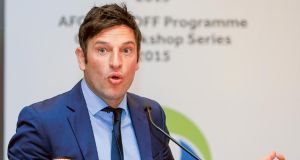 Noel Mooney, former goalkeeper with Cork City, Limerick and Shamrock Rovers, will officially take on the role of ‘general manager for football services and partnerships’.

The FAI’s has appointed Noel Mooney, to fill the role of former chief executive John Delaney for six months.

Mooney, a former FAI marketing executive, will be on secondment from Uefa, the European football governing body, for the six months. From Limerick, he is seen as close to Delaney and will officially take on the role of “general manager for football services and partnerships”.

Interim chief executive Rea Walshe is returning to her former role as chief operating officer. It will be regarded as an indication that Mooney will be taking control at a time when Uefa’s funding has become a critical to the association’s short-term stability.

In a statement, last night, the association said that Mooney, currently Uefa’s head of national association business development, will start back at the organisation here he previously worked for six years on June 3rd, “as the FAI builds for the future and continues to work in partnership with key stakeholders to achieve good governance”.

Mooney, a former goalkeeper with Cork City, Limerick and Shamrock Rovers, declined to speak to The Irish Times at the final of the Under-17 European Championships in Tallaght on Sunday afternoon. In a statement last night, he said the challenge of returning to Abbotstown at a time when it is deep in crisis is “something I will embrace as we deliver change”.

The move is unlikely to inspire confidence among those who were actually pushing for that change before the stories of governance issues revolving around Delaney’s management style at the association became public.

When the former goalkeeper went to work for Uefa in 2012, he described his then boss as “an inspiration”.

As recently as the summer 2017, a point by which almost everybody below board level seemed to know there were huge governance and financial issues at the association, he addressed its agm in glowing terms about how it was being run.

Although it is said he will return to Uefa after six months, there may be some scepticism among the would-be reformers who have spent more than a decade in the wilderness. Delaney, as it happens, got the job on a long-term basis having initially used a short stint in the hot seat to very good effect.

1 Rugby impasse continues as no deal reached in fourth round of IRFU salary talks
2 College football turns blind eye to Covid-19 by risking players' health
3 The Best Of Times: Harrington stares down Garcia in epic Claret Jug battle at Carnoustie
4 Jürgen Klopp: Liverpool will channel spirit of the All Blacks
5 Aubameyang double puts him level with Vardy in race for Golden Boot
Real news has value SUBSCRIBE