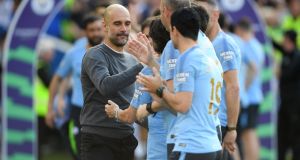 The Champions League: Manchester City’s final frontier. After a clean sweep of domestic trophies in a staggering 2018-19 campaign, and after claiming five of the last six competitions available in England, only Europe needs to be conquered by Pep Guardiola and his juggernaut team.

The manager knows it. At a Lionel Messi-led Barcelona, Guardiola guided his boyhood club to European Cup wins in 2009 and 2011. The Catalan has managed seven times in the continent’s blue riband club tournament since and failed to win it again: once with Barça, three with Bayern Munich and three with City.

The equation is simple for Guardiola to identify and weigh up. After claiming the last two League Cups and this season’s FA Cup with Saturday’s 6-0 trouncing of Watford, next season is surely the moment to forget pursuing these lesser trophies and instead marshal the extra physical and mental energy required for a tilt at a triumphant Champions League campaign.

The Watford victory was game number 61 for City in a season that started in August. They fell only three short of the maximum number of fixtures possible.

“I know we will be judged at the end on whether we win the Champions League,” said Guardiola. “I know unless we do that it will not be enough. This comes with me [MY PROFILE], I know that. I arrive in Barcelona, we were lucky we won it two times in four years, and the people expect I am something special that we have to win the Champions League and it’s still true.

“In this club, the points record [100 in 2017-18] and the domestic competitions is incredible, but the Champions League we don’t win because the teams are so good, the competition is so demanding, but we want to win it.”

In the three attempts under Guardiola, City have faltered twice at the quarter-final stage and once in the last 16. Last month, Tottenham eliminated them on away goals after a late VAR decision at the Etihad ruled out what would have been a winning goal from Raheem Sterling. Guardiola often cites “decisions by inches” as the difference in the competition’s late rounds.

Yet given how dominant City are, how deep their squad is (Leroy Sané, Kevin De Bruyne and Sergio Agüero were all on the bench for Saturday’s final, with the latter not even getting on to the pitch), Guardiola might calculate he can shift the decisive margins in his favour by ensuring all his A-listers are fresh when the business end of the Champions League arrives.

The manager’s intended recruitment this close season is designed to make his team more capable of getting through the rigours of a quarter-final or semi-final. Vincent Kompany may have announced he will leave after 11 years but Guardiola would have pursued a new centre-back regardless as he believes City are not dominant enough in the air and lack defensive pace through the middle.

Fernandinho’s age and the absence of a natural deputy for the 34-year-old Brazilian makes a defensive midfielder another key recruit this summer. Atlético Madrid’s Rodri is in the frame, and if Benjamin Mendy can also stay fit for next season, having failed to do so in each of his previous two, Guardiola will, in effect, have three new and high-class squad additions.

City’s dominance on the home front may turn off neutrals and opposing fans, but this is really not their concern. For Guardiola and his players the pursuit of excellence, the challenge of taking themselves and the club to the next level, is all. He is in no doubt what they need to do next.

“Continue to try to play good and to arrive at the last stages of competitions fighting,” the manager said after Saturday’s rout. “That is what I want, that is my target for the next season, to keep this spirit in this group.”

Guardiola admits to being tired but remains desperately hungry. “Yeah, of course. I wouldn’t be here next season unless I believed we could improve as a group. I know it will be difficult because people will compare and people cannot expect us to repeat the treble or four titles in one season [including the Community Shield]. That is something one team does once in their lifetime.

“I’m incredibly happy, exhausted, and that is the truth. I’m so tired, but I’m so happy, I’m calm and our fans were incredible and satisfied. Looking forward I will keep my energy a little for Monday to do our parade [in the city centre] and our last party of the season with our people and then go on our holidays. That is what is in my mind. I’m not focused, believe me, at the start of the season thinking: ‘I have to win one title, two, three or four’ – never.”

Equally he knows that next season is about vanquishing all-comers on the European stage. It simply must be.