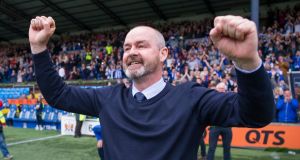 Steve Clarke has been appointed the new manager of Scotland. Photograph: Ian Rutherford/PA

Steve Clarke has been appointed as Scotland’s new head coach, the Scottish Football Association has announced.

The 55-year-old, who guided Kilmarnock to a third-placed finish in the Scottish Premiership this season, replaces Alex McLeish, who left the role in April.

“The Scottish FA is delighted to announce the appointment of Steve Clarke as Scotland national team head coach,” read a statement.

“Steve joins from Kilmarnock on a three-year contract until the end of the Fifa World Cup 2022 qualifying campaign and was appointed after an extensive recruitment process undertaken by the Scottish FA Chief Executive, Ian Maxwell, and endorsed by the board.

Clarke won both the PFA Scotland and Scottish Football Writers’ Association Manager of the Year Awards for steering Kilmarnock to their highest-placed finish since 1966.

“It is an honour to be appointed Scotland national head coach and I will undertake those responsibilities with pride and commitment,” Clarke said.

“I firmly believe we have a talented group of players who can achieve success on the international stage. I look forward to working with them and helping them to fulfil those ambitions.”

Injury to Marcus Rashford adds to the need to bring in new faces 20:45
Stephen Scullion completes marathon journey to Tokyo 20:30
Corofin combine total football with dark arts for three-in-a-row 20:03
Salah seals the deal as Liverpool see off a dogged Man United 18:39
Connacht huff and puff but Montpellier pull away at the end 18:36