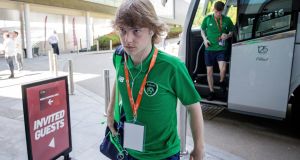 Mick McCarthy has named his 27-man squad for Ireland’s Euro 2020 qualifiers against Denmark and Gibraltar in June.

And he has handed a first call up to 18-year-old Bolton Wanderers midfielder Luca Connell, who broke into the first team during a trying season which saw the club relegated from the Championship and enter administration.

McCarthy is taking 23 players on a training trip to Portugal ahead of the double-header, with four players - Conor Hourihane, Richard Keogh, Glenn Whelan and Josh Cullen - involved in the playoffs.

And the absence of three midfielders has opened the door for Connell, McCarthy said: “Luca deserves this opportunity. With midfielders Conor Hourihane, Glenn Whelan and Josh Cullen all on playoff duty with their clubs in the coming weeks, this is the perfect chance to get Luca into the squad.

“He has had a fine season with Bolton playing 15 times in total and even with their relegation troubles, he has impressed so many people. I know a number of big clubs have sent scouts to watch him so this is a chance to get him in to work with the senior players and see how he gets on.”

Ireland travel to play Denmark on Friday June 7th, before welcoming Gibraltar to the Aviva Stadium on Monday June 10th.

*Indicates the player is on loan

1 Red Bull poised to protest over Mercedes’ new steering system
2 Nairo Quintana sustains suspected knee injury after being hit by car while training
3 Monica Seles: The warrior queen who could have been the best ever
4 Séamus Power rockets into share of clubhouse lead in Detroit
5 The Best of Times: Ireland’s Golden Generation make Grand Slam history in 2009
Real news has value SUBSCRIBE
Crossword Get access to over 6,000 interactive crosswords