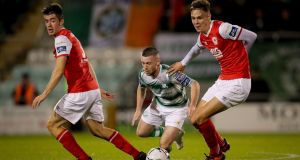 A potentially important point this for St Patrick’s Athletic as they strive to salvage a place in Europe from a frustrating season but the visitors will have enjoyed their night here at least as much for the damage they did to what was left of Shamrock Rovers’title challenge.

That may very well be formally ended on Monday night in Oriel Park where a win would make things completely sure for Vinny Perth’s side, a draw all but mathematically certain. In truth, though, it is only a matter of time with Rovers’ inability to squeeze out a victory here meaning that the end is likely to come that little bit sooner rather than later.

Perhaps the sense that that game is really already up and that the cup now represents the club’s real hope of a trophy this season, affected the performance in this match. Stephen Bradley’s side dominated the closing stages, to be fair, as they chased the goal they needed for victory. But they lacked a little of the usual attacking edge and only once did they seriously threaten to score from play with young Thomas Oluwa doing well to release Seán Kavanagh eight minutes from time only for Brendan Clarke to come quickly and spread himself well to block the shot.

With virtually the last kick of the night, the teenager might have grabbed one himself after Ethan Boyle picked him out on the edge of the area but when he took a touch the moment passed and the shot, when it came a moment later, was blocked easily enough.

A Rovers goal at that stage, though, would have been harsh on the Inchicore outfit.

A couple of weeks on and there were enduring signs of new boss bounce in the visitors’ performance. Harry Kenny’s philosophy had always been attacking but in practice, the team too often seemed to get sucked back, slowly leaving Mikey Drennan utterly isolated up front.

Here, there seemed to be a more concerted effort to push everyone further up the field and the striker received meaningful support on either side from Darragh Markey and, until he had to be replaced by Chris Forrester late in the first half, Rhys McCabe.

All told, the approach enabled St Patrick’s to pose more of a threat through the opening half than might have been expected and they would have led at the break but for a truly exceptional reaction stop by Alan Mannus after a break that ended with Kevin Toner driving the ball goalwards from 15 yards or so.

It was one of a string of good saves over the course of the evening with Mannus having already made a decent one from Lee Desmond by that stage. Clarke starting to get into the act when he got a hand to a shot towards the end of the half as Rovers started to exert a little bit more pressure, then doing really well to keep a close-range Lee Grace header out after just about an hour.

It remained relatively even as a contest, though, until the closing stages with neither side getting completely on top in midfield until the home side’s late push.

Most of their best chances came from Jack Byrne’s set pieces with Roberto Lopes very narrowly failing on a couple of separate occasions to make the required connection with a well weighted corner, but they were frustrated too by some solid defending and Stephen O’Donnell will feel his side did enough overall to earn the draw