Refocus or get out, Pochettino warns Spurs’ unsettled stars 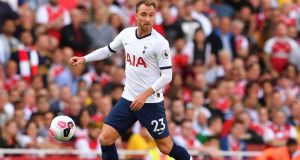 Mauricio Pochettino has called upon the clutch of Tottenham players who wanted to leave over the summer to refocus or prepare to spend time on the sidelines.

Christian Eriksen, Danny Rose, Serge Aurier and Victor Wanyama were determined to force moves away, and uncertainty stalked Toby Alderweireld and Jan Vertonghen who, like Eriksen, have entered the final year of their contracts.

Yet when the European window closed, all of them had stayed, with Pochettino bemoaning the difficulty of concluding outgoing business. The problem is the players are on big wages at a club that have just reached the Champions League final. Where are comparable clubs that want them and are ready to pay them more?

Pochettino predicts fresh speculation will soon engulf his squad as attention turns towards January but, before today’s home game against Crystal Palace, he wants to make a fresh start.

“Always it’s difficult [to sell players] and then I think Tottenham have more rumours than other clubs,” Pochettino said. “In one month the rumours will start again.”

Pochettino, asked about Wanyama and Eriksen, said: “Victor Wanyama is in my plans. Christian is in my plans. When it’s one player [who wants to leave], then okay. But when it’s a few players, who start to make it difficult to create a good dynamic, a positive dynamic … Now we need to start to win games. Be refocused and who is not refocused is going to be out.”

Eriksen said last week he wished he could have decided his future himself – “like you can do in [the computer game] Football Manager” – which seemed to highlight a desire to be elsewhere. Pochettino, though, does not doubt the midfielder’s commitment.

“He isn’t not going to show the commitment because there’s only one year left,” Pochettino said. – Guardian