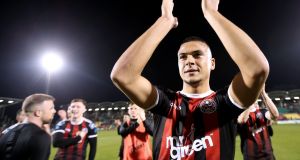 Shelbourne’s Dave Henderson says Ali Reghba’s move to Leicester saw the club miss out on compensation fees for his development because he had turned professional with Bohemians before moving. Photo: James Crombie/Inpho

As senior clubs struggle to pay wages and plot a way through the Covid-19 crisis, there is renewed criticism of the FAI underage leagues intended to help develop players for the senior international side, now managed by Stephen Kenny. There have been calls for the association to use the current lay-off to radically overhaul their structures.

Shelbourne have again claimed that the rules dictating the movement of players to Britain is completely undermining the financial viability of youth development here, while some First Division clubs have held discussions in recent weeks about the desirability of even participating in national leagues at younger age levels.

Dave Henderson says that the Tolka Park outfit have been offered less than €1,000 combined for its part in developing two promising young players, Ali Reghba and William Hondermarck, who completed transfers from Bohemians and Drogheda United to Leicester City and Norwich City respectively.

Both players spent a couple of seasons at Shelbourne and had they remained amateurs until they left for England, the Dublin club would, he says, have been entitled to more than €30,000 under the rules that govern player development compensation.

Instead, because they turned professional prior to departure it meant that the selling clubs could negotiate fees approaching €100,000 between them and Henderson believes those larger figures are possible on the basis of the hugely reduced amounts of domestic compensation offered. Theirs are not the first cases to prompt calls for changes to be made to the rules.

“Until this sort of thing is sorted out, you might as well not have academies here,” he says. “The way the system works now, you can develop a player from 12 until 15 then another club can just look at him and say: ‘okay, he’s better than what we have had for the last four years,’ and they just whip him. If they then sell him on you might get 500 quid. That can’t be right.”

Henderson had recently produced a document highlighting a number of issues within the underage game, including the movement of young players between clubs, especially in Dublin where competition for the brightest prospects is intense. That competition and the importance of the system to the wider Irish game only seems set to increase post-Brexit if, as expected, far fewer players go away at 16.

“They (the FAI) have an opportunity to sort this out now. There is nothing on, no football happening. So they have the chance to rip the rulebook up, start from scratch and get it right. If things aren’t sorted then the whole system is going to fall apart.”

St Patrick’s Athletic, who have been hugely successful in the national underage leagues, are one of the most active when it comes to recruitment but the club’s director of football, Ger O’Brien, insists that that they abide by the rules and he agrees that the commitment between club and player needs to extend beyond the current one season maximum.

“We have no schoolboy set up for below under-13s so when we recruit for that age group we have to be quite aggressive,” he acknowledges, “but what you are doing is going to the player and his parents, setting out your case in terms of what your club has to offer.”

After the new the current system of links between schoolboy and League of Ireland clubs was established, St Pat’s announced partnerships with Crumlin United, Cherry Orchard and Belvedere but only the first still exists and O’Brien says the club recruited five members of last year’s highly successful under-13s side from St Kevin’s Boys, a leading schoolboy outfit that works closely with Bohemians.

O’Brien acknowledges that the recent break with Belvedere happened because that club, which had produced the likes of Wes Hoolahan, Stephen Kelly and, most recently, Troy Parrott, did not see sufficient return for them on the relationship.

Indeed, if Parrott had gone to Tottenham while the partnership was active it might have cost Belvedere half of the €80,000 or so they would have been entitled to for developing him.

Vinnie Butler, a former Ireland under-16 coach and leading light at the club, has been a relentless critic of the new structures, arguing that the schoolboy sides were sacrificed to advance the cause of League of Ireland outfits that had no tradition in youth development.

“I completely understand that frustration,” says O’Brien. “And he has a point. When Garrett Kelleher came in here in 2006 he bought a football team but now it is a club with football liaison officers, community officers, youth development officers.

“The League of Ireland clubs had their heads buried in the sand and it took a long time for them to wake up but the league has raised standards in recent years. It is the top league in the country and the things that have put in place make sense; it was the right way to go. But I know some people have difficulties with that.”

Both he and Henderson contend that their first priority is the development of players for their respective first teams and both have links with colleges, one extending back over a decade in the case of St Patrick’s while Shelbourne have more recently established a programme with DCU. However, competition on the recruitment front around Dublin – where Shamrock Rovers have also done huge work to transform their youth set up and the wider landscape in recent years – is “hot,” according to the National Coordinator of the FAI’s Emerging Talent Programme, Niall Harrison, something he believes is a good thing at a time when Brexit might be about to have an enormous impact.

Harrison acknowledges that the leagues are not perfect but says that issues like minimum duration of registration are currently being reviewed by the association. “There are wheels in motion on that one, on contracts for underage players,” he says. “There are certainly people looking into what’s the best way to go about it and what happens in other countries.”

The first year of the under-13 league is still being assessed and he believes it and the wider structures will get better over time. He expresses a desire, however to see “some clubs take the leagues more seriously,” at a time when talks are said to have taken place between First Division clubs in recent weeks about their ability to participate in nationally organised under-13 and under-15 competitions; something that will go down well with those schoolboy outfits that met before Christmas to voice their unhappiness with the current structures.

Drogheda United chairman Conor Hoey expresses the belief that those at under-13 and 15 levels should be more localised.

“I don’t think that 13-year-olds from Athlone should be going to Kerry to play games, that would be my view, and I think it is time to talk about that,” he says. Hoey points to both the demands being placed on the young players and the additional financial costs for clubs, who each receive roughly €55,000 in funding annually to support their academy sides.

Travel is a significant element of the cost of running these teams and quite a few of the more committed clubs say they spend as much again between the four underage national league sides.

Hoey also argues that the FAI should be using the current shutdown for a fundamentel reappraisal of the situation. “This is a time for every club, for all of us to take stock of how we are going to operate in the post Covid-19 world.”

This is the first article in a new series focusing on youth development in Ireland. You can read each part in The Irish Times and on irishtimes.com/sport every day this week.

3 Marlay Park has designs on golf for all weathers