Champions filling seats with mannequins of supporters as attendances plummet 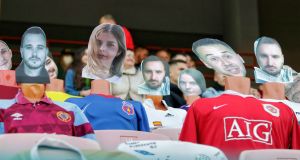 Belarus’s FC Dynamo Brest, one of a handful of soccer clubs still playing in Europe, is filling its stands with mannequins sporting cut-out portraits of fans to boost the atmosphere as many supporters stay home because of the coronavirus.

Belarus has the only professional league in Europe still playing, as its authoritarian president, Alexander Lukashenko, has shown little regard for the pandemic or the need for lockdowns to prevent it spreading.

The league is one of Europe’s least glamorous, and rarely gets a team into the latter stages of Uefa’s continental competitions.

But its moment in the spotlight is filling the void for foreign fans starved of football at home, and raking in a string of foreign broadcast deals.

Nevertheless, many local supporters, more worried about the pandemic than their president, have stopped going to matches.

The club found a creative answer by inviting fans from around the world to buy virtual tickets online.

In return, the fans’ photos are pasted onto the top half of a fashion dummy sitting inside the stadium, and the fans themselves receive a matchday magazine sent to their home address.

The money raised will be donated towards fighting the coronavirus.

“Our fans from all over the world seem to be happy! Thanks for your support, guys!” the club tweeted.

On Wednesday, as Dynamo Brest hosted Shakhtyor Soligorsk, a section of the stands was filled with the faces of supporters from countries including Russia, Britain, the United Arab Emirates and Iran sporting a range of overseas club shirts, the club said.

Belarus has 1,486 confirmed coronavirus cases and 16 deaths, according to the health ministry.

Lukashenko has called the outbreak a “psychosis” that can be fought by drinking vodka, taking saunas and driving tractors.

Brest next play at home on April 12th, against FC Isloch.

1 Sideline Cut: Vignette shows why Bird is the true shark in The Last Dance
2 Farrell and O’Connell provide insight into changes in Ireland’s analysis
3 Niyi Adeolokun and Tom McCartney among Connacht departures
4 Liverpool and Everton to oppose plans to play games at neutral venues
5 GAA preparing for earlier return to activity but pitches to remain closed
Real news has value SUBSCRIBE
Crossword Get access to over 6,000 interactive crosswords