FA Cup draw: Liverpool to meet Everton in third round

Arsenal begin defence away to Forest, while there are three all Premier League ties 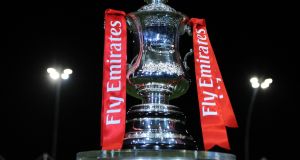 The draw for the Emirates FA Cup third round was made on Monday evening. Photograph: Nathan Stirk/Getty Images

Liverpool and Everton face an all-Merseyside FA Cup showdown next month after being drawn out together in Monday evening’s third-round draw.

The pair, who last met in the tournament in the 2012 semi-final which Liverpool won 2-1, will play each other at Anfield on the weekend beginning January 5th.

Premier League leaders Manchester City are at home to Burnley, while potential upsets include West Ham’s trip to League One high-flyers Shrewsbury, and Championship leaders Wolves at home to ailing Swansea.

Manchester United are at home to Championship Derby, Tottenham meet League One AFC Wimbledon at Wembley, while holders Arsenal face a difficult trip to Nottingham Forest.

Brighton and Crystal Palace will rekindle their rivalry at the AMEX Stadium after last month’s Premier League goalless draw which was marred by crowd trouble.

Hereford boss Peter Beadle said the prospect of facing Leicester at Edgar Street would give his Southern Premier Division side all the incentive they need to see off Fleetwood.

Beadle told BBC Sport: “Former Premier League champions coming to Edgar Street - we’ve got 90 minutes to get through but if we do, there’s the incentive.

“We’ve got three league games before that and they are our priority, but then we can relax and enjoy the replay knowing we have got a huge incentive.”

The other remaining non-League sides did not fare so well in the draw, with all three handed difficult away trips provided they come through their respective second round ties.

National League AFC Fylde will not be too disappointed with a trip to Premier League Bournemouth if they upset the odds in their replay at Wigan.

Woking will travel to Aston Villa if they overcome Peterborough at the second attempt, while Slough Town would travel to Doncaster if they won their outstanding second round tie against Rochdale on Monday night.

Ties to be played January 5-7th