Dundalk and Shamrock Rovers both pick up three points

Round-up: Rovers get their title challenge back on track with easy win over St Pat’s 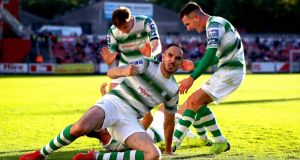 Whilst champions Dundalk remain eight points clear, Greg Bolger and Sean Kavanagh found the net in either half to keep Rovers’ hopes alive.

Following an initially tentative start to the contest, Saints netminder Brendan Clarke turned away a firm strike from his namesake – Trevor Clarke – on the stroke of 20 minutes. Though this was a minor let-off for the Saints, they immediately forced Alan Mannus into action at the opposite end.

An error in the Rovers defence saw Mikey Drennan picking up possession in an advanced position and following intelligent link-up play with Christopher Forrester, he produced a fine stop out of the Northern Ireland international.

As the action progressed, the prospect of a scoreless first half was beginning to loom large. That was until the unlikely figure of Bolger stepped forward in the opening minute of stoppage-time. A league winner with Pat’s in 2013, the Wexford man found space in the opposition box and unleashed an unstoppable drive into the bottom left-hand corner.

Having gone through the month of June without a win to their name, Rovers suddenly had maximum points within their sights.

New additions Graham Cummins, Garry O’Neill and Neil Farrugia are expected to add considerable depth to their squad, but it was 2018 recruit Kavanagh who doubled their lead four minutes after the restart.

The ex-Fulham man superbly negotiated a free-kick on the right-hand side, firing low past the helpless Brendan Clarke for his third goal of the campaign. This left Pat’s with a mountain to climb for the remainder of the contest and despite the admirable endeavours of Harry Kenny’s men, a dramatic fightback never materialised

League leaders Dundalk made it eight wins on the trot with a convincing win over Waterford at Oriel Park.

Vinny Perth’s side went in front with less than 90 seconds played when Blues goalkeeper Matthew Connor parried the ball against teammate Kenny Browne for an own goal.

Dundalk made it 2-0 after 24 minutes, Kelly arriving at the near post to sweep Hoban’s ball into the far corner before JJ Lunney saw an effort come back off the underside of Gary Rogers’ bar.

Jamie McGrath added a third in the second half to seal the victory before Shane Duggan rattled the woodwork late on for the Blues.

Goalkeepers James Talbot and Peter Cherrie earned their respective sides a point with impressive second half saves as Bohemians and Derry City settled for a share of the spoils at Dalymount Park.

Bohemians’ Talbot was first to excel with a brilliant double save on 70 minutes.

Greg Sloggett put David Parkhouse in on goal with Talbot out smartly to save with his body. Quickly back up on his feet, the Bohs keeper was there again to get a hand to Junior Ogedi-Uzokwe’s follow-up before Barry McNamee shot over.

Cherrie then produced the save of the game on 82 minutes, going full stretch to push Keith Ward’s stunning free kick out for a corner.

Cork City are still looking for their first league win since May after they were held to a scoreless draw by relegation threatened Finn Harps in a tight encounter at Finn Park.

After the 4-1 defeat at home to Derry City, Cork were anxious to respond in a positive fashion.

The visitors conjured up the first chance through Gearóid Morrissey on 15 minutes while Harps finally worried City on 32 minutes when Caolan McAleer crossed from the right side of the box but Mark Russell scuffed his shot.

McAleer went closest for Harps in the second half while Darragh Rainsford scooped the ball over the target for City.

Sligo Rovers picked up their first win in five as they hammered UCD at the Showgrounds.

Sligo were ahead less than 60 seconds later, Ronan Coughlan tucking his effort beyond Conor Kearns for his first of the night, while the same player had Rovers’ third on the stroke of half-time. Romeo Parkes netted early in the second half, moments before Coughlan had his hat-trick to make it 5-1 as he lifted the ball over Kearns.