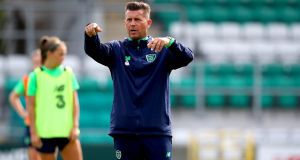 Stephanie Roche has urged the Football Association of Ireland, despite all their current distractions, to deal “seriously” with the task of replacing Colin Bell as manager of the senior national team after the announcement on Saturday that he is leaving the position to take up the role of assistant coach at Huddersfield Town.

With the team beginning their Euro 2020 qualifying campaign on September 3rd against Montenegro, Roche and her international team-mate Louise Quinn, speaking on RTÉ’s coverage of the World Cup, stressed the need to appoint a successor of a similar calibre to Bell, and to avoid choosing an interim coach.

“We need to make sure that this role is made a priority [for the FAI] and it’s not just about putting an easy pick in there for the time being, ‘we’ll deal with it later’,” said Roche.

“This is our best chance of qualifying for a major tournament, so we don’t want to let it slip by because Colin is gone. It’s got to be taken really seriously and hopefully the FAI will do that and try to pick the best person for the job, rather just that easy pick.”

Both Roche and Quinn expressed their surprise and disappointment at the news, not least because it has come just nine weeks before the start of the qualifying campaign.

“It’s just the shock of it,” said Roche, “we all thought Colin was going to be here for at least the qualifiers because he’s talked so much about it, so it’s just disappointing because he has put a lot of work in to it. For me the question is did the FAI try and keep him as much as they possibly could have? I don’t know the ins and outs of the story, but I think they should have tried to keep him.”

“It has come as a surprise to us,” said Quinn, “it’s a disappointing scenario, and the timing isn’t great for us. But the thing about this team is that we’ve been through a lot, we’ve had to fight a lot, and this is just going to be another of those situations where we’re going to do our best to get through.

“We don’t want to move backwards now, we’ve got to move forwards, we’ve fought for where we’ve got now, we’ve improved massively as a team, we just need that backing now to make sure we can push forward and hopefully get a good replacement in there.

“We’ve hit high standards and the quality and winning mentality that Colin brought to the squad was really brilliant. I think he was trying to edge away from the Irish mentality of ‘ah, it’ll be grand’. We learnt a lot from him, we have to move on now and try and put it behind us.”

Dave Connell, the FAI’s head of women’s underage development who has enjoyed plenty of success as coach of the Irish under-17 and under-19 teams, is regarded as the frontrunner to succeed Bell having worked with several of the current senior squad when they played at underage level.

Eileen Gleeson, former manager of Peamount United and UCD Waves and the possessor of a Uefa Pro Licence, may also be a contender for the position.