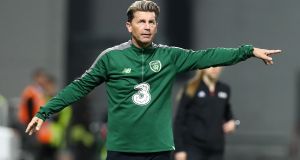 Colin Bell is to leave his role as Ireland women’s coach to become an assistant at Huddersfield Town. Photograph: Matteo Ciambelli/Inpho

Colin Bell has shed some light on events of the last few days which resulted in him leaving his position as manager of the Republic of Ireland’s women’s team to take up the role of assistant coach at Huddersfield Town.

Speaking to RTÉ just after getting off a plane in Germany on Saturday evening, Bell said that he had turned down an initial approach from the English club before they came back with an improved offer, at which point he informed the Football Association of Ireland and entered in to discussions with them about his future.

He was hopeful, he said, after those talks that he would remain in the job with an expanded role in the development of the women’s game in Ireland, but that proposal was rejected by the board of the FAI on Thursday. It was then that Bell decided to accept the Huddersfield offer.

“I had a fantastic offer which I declined, then Huddersfield made a better offer and I told the FAI what was going on. The question then was ‘what do we have to do to keep you?’

“So we went through a few things and had some really good conversations. I made a list of things I felt needed to be done, and how my position should then be defined – we were speaking about over the next four years. We were all very optimistic that that would happen, but after a board meeting, which happened on Thursday evening, this was not able to come to fruition, unfortunately, and I had to make the decision to leave the FAI.

“I was very honoured to get an offer from a Championship side, but I’m hoping the girls can carry on the way we’ve been going. I’m absolutely devastated to give up this team, I loved working in Ireland, I loved working with the girls, so it’s been a rollercoaster, emotionally, the last few days. One side of me is very happy and honoured, the other side of me is absolutely gutted that I have to leave such a fantastic set of players.”

“But the FAI have to make sure the women’s game continues to grow and I think my plan would have helped. The women’s national team has come on in leaps and bounds, but still, I was a little bit frustrated that work on the actual structures of underage football and the women’s national league was going too slow, and I think I had a good plan in place to improve that.”

“I was told, basically, that things would carry on as they were to start off with, and then we’d see what happened, but that wasn’t good enough for me. I want progression at every level, and I think I would have been able to really, really grow the game. It will grow, I’m sure, because we’ve got a great set of girls, but the progress in and around the women’s game is just going too slow, as far as I’m concerned.”