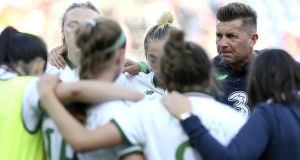 Manager Colin Bell speaks to the players after the Women’s World Cup qualifier in May 2018 in Norway. Photograph: INPHO/Andrew Halseid Budd

When it rains, the Football Association of Ireland must now be concluding, it buckets down. They’re not a body that often elicits sympathy, but with their plate already overflowing with “issues” that need dealing with, the timing of Colin Bell’s departure from his role as manager of the women’s national team, right bang in the middle of the greatest showpiece the women’s game has ever had, was unfortunate to say the least.

Bell had told RTÉ on Saturday evening that he had, following talks with the FAI, been “optimistic” about remaining in his position, despite an offer from Huddersfield Town to become their assistant manager, with an expanded role to help the development of the women’s game in Ireland having been discussed.

But the board of the FAI had, he said, ruled out such a broadening of his position in a meeting on Thursday evening, prompting him to resign from his post.

In response, the FAI issued a statement on Sunday saying that they had opened discussions with Bell, who was contracted to them until late 2020, once he informed them of Huddersfield’s approach to see if they could “facilitate his requirements in order for him to remain”.

Following those talks, though, “the Board discussed Colin’s financial and other demands at a meeting on Thursday night but, given the current circumstances around the Association, the Board decided that it was not in a position to agree to his terms to stay at this point in time”. When told of the decision, Bell quit to take up his new role at Huddersfield.

“The FAI has already begun the process to recruit a new manager and will advertise the position,” the statement continued. “General manager Noel Mooney has contacted a senior squad representative to reassure the players that their bid to qualify for the European finals will be fully supported in the wake of Colin Bell’s decision to resign.”

With the Euro 2020 qualifying campaign beginning in just nine weeks’ time, there are echoes of the departure of Graham Shaw from the Irish women’s hockey job for pastures new just three months before the team was due to start its Olympic qualifying efforts. All hasn’t being going smoothly either in the Irish rugby set-up, so that’s three of our major national women’s teams not without their troubles.

Not that Bell’s exit has been universally lamented. While Louise Quinn and Stephanie Roche saluted his impact during his time in charge, Áine O’Gorman, who retired from international football last September after winning 100 caps over 12 years, questioned whether his reign had been an especially successful one when she spoke to 98fm on Sunday. “His results were okay – but I don’t know if they were any better compared to past managers,” she said.

With a record of nine wins, nine defeats and four draws from his 22 games in charge, with just two victories in the last nine outings (albeit with weakened teams at times), O’Gorman had a point. But an encouraging World Cup qualifying campaign had given cause for optimism, the highlight a scoreless draw away to reigning European champions the Netherlands, who have reached the semi-finals in France. In the end, Ireland finished third in a formidable group that was topped by Norway, ousted last Thursday by England at the quarter-final stage.

But there was also criticism of Bell for overlooking too many experienced players in favour of youth, for example making Tyler Toland, just 43 days past her 16th birthday, Ireland’s youngest ever senior international, the feeling being that these players weren’t yet ready for senior football at that level.

And in a mirror image of the long-existing tensions in the men’s set-up, there was some disgruntlement with Bell’s preference for “foreign” based players, and his encouraging of those with Irish clubs to seek opportunities abroad. One of his last acts as Irish manager was to recommend Amber Barrett, top scorer with Peamount United in the domestic league for the past few seasons, to FC Köln, accompanying her there last month when she signed a two-year professional contract.

Much and all as such departures might diminish the league at home, it’s hard to quibble with Bell’s belief that these players would benefit – football-wise and financially – from playing in Europe’s top leagues, as so many of the Irish squad now do. The bulk of them are playing in England’s Super League, among them Quinn (Arsenal), captain Katie McCabe (Arsenal), Leanne Kiernan (West Ham), Megan Campbell (Manchester City) and Niamh Fahey (Liverpool), with four more playing in Germany (Barrett, Claire O’Riordan, Diane Caldwell and Emily Kraft), and a bunch more on scholarships in the United States.

Bell was appointed to the Irish job just two months before his squad threatened to go on strike after taking a public stand on their shabby treatment by the FAI. Ultimately he benefited from that stand with the improved conditions that ensued, but there’s a spotlight shining yet again on how seriously the association treats the women’s side of its operation.

While Dave Connell, the FAI’s head of Women’s Underage Development and coach of the Irish under-17 and under-19 teams, is the favourite to succeed Bell, there’s plenty of support among the local football community too for Eileen Gleeson, former manager of Peamount United and UCD Waves, a woman who knows the domestic league better than anyone.

Earlier this year she said she wouldn’t blame any Irish footballer for switching to the GAA, so disillusioned was she about the running of the game in Ireland. Whether she gets a chance to fix it remains to be seen.