Phil Neville: ‘Losing a semi-final would mean nothing to me’ 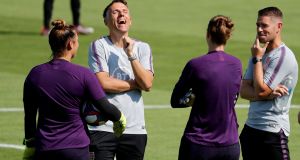 Phil Neville has revealed England’s World Cup preparations went awry late last year before being put back on track thanks to a “truth and honesty” session in the Arabian desert.

As the Lionesses’ manager finalised plans for Tuesday’s semi-final against the USA he acknowledged that a chastening defeat against Sweden in Rotherham last November “ruined Christmas” for him.

That 2-0 reverse left Neville ripping up and redrafting his blueprint for a January training camp in Qatar, with on-pitch workouts swapped for soul-baring evenings in Doha and the surrounding desert.

The five-star hotels lining the Qatari capital’s Gulf shoreline are well known for hosting high-stakes political negotiations but Neville opted to remove his players temporarily from England’s luxury beachside base as politeness and pleasantries were briefly replaced by somewhat harsher home truths.

“We had a real big moment when we got beaten by Sweden,” Neville said. “My whole Christmas was ruined by that game. It wasn’t losing, it was the manner of the defeat. So we took the players to Qatar and we literally transported them into the desert for a meal.

“We put everything on the table. If we didn’t like each other, if there were friendship groups, or whatever, we stripped it bare and laid it on the table. It was a throwback to one of those old-fashioned days when you just sit down, have an honest conversation and move on.

“There were a lot of honest conversations in Qatar and we came out of that camp and won the SheBelieves tournament in America. From then on we’ve been like a steam train.”

If the bonding process began under a vast star-spangled Arabian desert sky, it was properly cemented during a more conventional evening gathering in Doha.

“The players took me for a night out for my birthday,” Neville said. “That was the particular moment I turned to my assistant [Bev Priestman] and said, ‘We’ve got it now’, because we really came together.

“Sweden was the best thing that happened to us; it was the kick up the backside we needed.”

England returned from Doha with everyone apparently buying into a clearly defined plan. “The common goal, the common vision, is winning a World Cup,” Neville said. “Our common agreement is that we want to create a legacy; we know that, if we win the World Cup, then everything else falls into place.

“That common goal means egos have now been put to one side. It’s not about individual egos and Golden Boots. It’s just about winning. I’ve got 23 players who don’t care who is on the pitch, they just care about victory.

“That’s the mentality we’ve brought in. Losing a semi-final would mean nothing to me; they only take pictures of the winning team.”

With temperatures set to be around 27 degrees by Tuesday’s 9pm kick-off, England must cope with the unforgiving heat making Lyons feel more like part of the Middle East than western Europe but Neville remains undeterred.

England’s manager lifting the SheBelieves trophy in March proved a transformational moment, providing his players with a necessary craving for glory.

“SheBelieves was my big moment, my big breakthrough,” Neville said. “You had to get on that platform, hold that trophy and have the medal round your neck. After that’s happened, you want it again and again.

“When I first won the league title with Manchester United I wore my medal for the next two or three days because I thought, ‘I need more of this.’ The best players want that feeling again and again. We have to stop being a semi-final team, make the next step and become serial winners like the USA.”

If Neville’s admiration for Jill Ellis’s side was diminished by the revelation that the USA had sent two “undercover operatives”, aka plain-clothed members of their administration team, to snoop around the Lionesses’ team hotel, he laughed off a supposed sequel to “Spygate”.

TV camera crews filming England’s semi-final training session spotted FA security staff apprehending a figure seemingly lurking in the hillside bushes but the excitement evaporated when the “intruder” turned out to be an extremely puzzled local taking his daily walk.

It provided something to laugh about during the night-time tableau which unfolds when England’s squad finish their evening meal.

“The players don’t leave each other’s sides after dinner,” Neville said. “I’ve played in successful sides and you smell it. In unsuccessful sides players go to their rooms when dinner finishes at 7.45pm. But my players sit around the eating room, playing music, laughing, joking. They’ve got that look in their eyes; they’ve got ice in their veins. I think to myself, ‘We’ve got something here’, but tomorrow night we’ve got to prove it.”