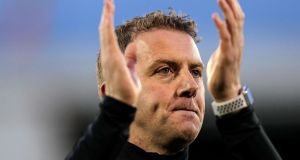 With Shamrock Rovers idle, champions Dundalk have an opportunity to open up a three-point lead at the top of the Premier Division table when they face the only side they’ve yet to beat this season when Sligo Rovers visit Oriel Park tonight.

Dundalk have reeled in and overtaken their Dublin rivals, albeit on goal difference, in an unbeaten run of 10 league games since losing 2-1 at the Showgrounds in mid-April.

“It’s been a brilliant run for us over the past few weeks,” said Dundalk head coach Vinny Perth.

“We’ve been in good form and we want to keep it going. It’s not going to be easy, but hopefully we can play as close to the best of our ability and go win the game.”

Robbie Benson (broken leg) and Jamie McGrath (foot) remain sidelined for Dundalk while Cameron Dummigan damaged ankle ligaments in the EA Sports Cup win over UCD on Monday and is out for up to two weeks. Seán Murray, John Mountney and Daniel Kelly face fitness tests.

Unbeaten themselves in seven league games, Sligo are without Dante Leverock who suffered a concussion at Bohemians last week. The central defender is then set to travel to meet up with Bermuda ahead of the Gold Cup.

Manager Liam Buckley waits on defenders Regan Donelon and Johnny Dunleavy, who are doubtful with muscle strains, though Niall Morahan is back fit.

“Whether we are under the radar is something I don’t dwell on really, but what is happening is we are fundamentally getting better and improving,” said Buckley.

St Patrick’s Athletic take on Cork City at Richmond Park without the injured Lee Desmond and Conor Clifford while Rhys McCabe is suspended.

Cork interim manager John Cotter is confident of having captain Karl Sheppard and Conor McCormack back after they both missed the EA Spots Cup defeat at Bohemians on Monday. Cian Murphy remains out while Conor McCarthy and Dan Casey need to prove their fitness.

Buoyed by that cup victory over Cork, third-placed Bohemians will strive to end their run of five league games without a win when bottom side Finn Harps visit Dalymount Park.

Captain Derek Pender is suspended while Darragh Leahy is away with the Republic of Ireland under-21s and Keith Buckley is a fitness doubt.

On the plus side, midfielder Conor Levingston returns from a ban while goalkeeper James Talbot is released from training with the Ireland senior team for the game.