Stability unlikely for Chelsea and Sarri despite Europa win 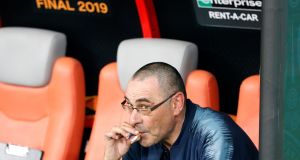 You hope Maurizio Sarri enjoyed his first trophy in professional football – but this, surely, was not how he imagined it when he whiled away the hours working on the foreign exchange desk at a bank in Florence. Perhaps he had dreamed of one of the great citadels of European football, of Wembley or San Siro, of the Camp Nou or the Luzhniki, but instead he got the Olympic Stadium in Baku. It is a place so ill-conceived that not only is the stadium inaccessible to most of Europe but the pitch seems inaccessible from most of the stands, laid out like a Subbuteo cloth on a snooker table, as though somebody had seen the London Stadium and thought: “We’ll do that, but more so.”

Even if there had been tens of thousands of Chelsea fans packed into stands tight to the pitch, they would probably not have been singing Sarri’s name – or at least not in a positive way. Perhaps the “Fuck Sarriball” chant will return in the future as ironic reappropriation but it seems more likely this was Sarri’s last game in charge of the club. Nothing, of course, is ever entirely clear at Chelsea, existing as it does in a permanent fug of intrigue, thriving on its eternal transition from one ill-defined approach to the next, but it may be the apparent interest from Juventus in Sarri gives everybody a way out. Sarri, like Rafa Benítez, found there is nothing more likely to win the Europa League for Chelsea than a manager openly mocked by half the fanbase.

On the surface, the dissatisfaction seems bewildering. Chelsea this season have, after all, won one cup competition, reached the final of another and come third in the league as the top two broke records. Revolutions have been built on far less. If that sort of return is somehow not enough, then Herbert Chapman, Bill Shankly, Don Revie, Brian Clough (twice) and Alex Ferguson would all have been sacked long before building league-winning sides. Nothing, perhaps, is so damaging to the long-term prospects of clubs than impatience and the demands for success now. It is not a coincidence that the Champions League final will be contested by clubs whose managers have been in place since 2014 and 2015 respectively; as of Wednesday night (or Thursday morning, Baku time), neither has won as much in English football as Sarri.

But that is not to say patience is always appropriate. There have been occasions when silverware has served as a veneer for deep-rooted problems, when the quality of football has not lived up to results. And there have certainly been times for Chelsea this season when the football has not been good. There have been bizarre collapses, as at Everton, Bournemouth and Manchester City, and even as home wins were racked up in the mid-to-latter part of the season, the football was often ponderously slow.

Yet that should not be unexpected. Sarri is an idiosyncratic coach; his methods take time to absorb. He was never going to reproduce the flair and verve of his Napoli side overnight, particularly given his Chelsea squad is broadly unsuited to that style and has consistently been prone to bouts of truculence. Just as with Louis van Gaal at Manchester United, the attempt to impose an alien system led to a lack of pace as players tried to adjust. And as with Van Gaal at United, there perhaps comes a point when the directors decide everything is never going to click.

Whether that point should come after only a year is doubtful. Chelsea have spoken of a change of approach, of looking to build a more long-term strategy, but the fact remains that if Sarri is still at the club at the end of November, he would be the first Chelsea manager to survive so long into a season after failing to win the league since Claudio Ranieri.

It would be ludicrous to expect Sarri to have a team fully functioning in his image after only a season, akin to sacking Michelangelo a year into painting the ceiling of the Sistine Chapel because it was not finished. But then, if it had turned out Michelangelo could not do hands, dismissing him would be justified. There is a school of thought that Sarri’s football cannot function to the very highest level in the Premier League and, if that is what the board has decided, the Juventus offer could be a convenient way of offloading him without appearing impatient.

And if this is farewell, then at least Sarri has gone out with one of the most impressive halves of football his Chelsea have produced, one that he enabled with the first-half tweak of dropping his full-backs deeper to neuter the attacking threat posed by Arsenal’s wing-backs. Once stability had been imposed, Eden Hazard seized the opportunity with two goals and an assist. Yet he will be gone before the start of next season.

And that, really, says everything about the modern Chelsea. Of the two people most responsible for this success, the 16th major trophy in 16 years under Roman Abramovich, one will almost certainly be in Madrid next season and the other may be in Turin. Football’s glory can be extremely fleeting. - Guardian