Friendly feel of Baku final like putting lipstick on a pig

TV View: No matter how hard anyone tried there was a lot missing in Azerbaijan 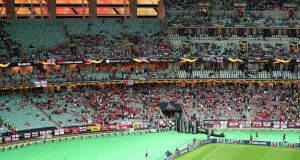 Even Jake Humphrey, a man capable of likening, say, an inebriated scrap outside the chippers at midnight to the Thrilla in Manila, was struggling to talk this one up. “It feels like ... a friendly,” he said half an hour before kick-off when it was fairly evident you’d find more atmosphere on the moon than you would in Baku’s Olympic Stadium. Even Jake can’t put lipstick on a pig.

If a man from the moon visits one day and asks you to sum up Uefa for him, just tell him about the 2019 Europa League final. The governing body, by their choice of venue, had, gloriously, managed to give the occasion the feel of a pre-season friendly between Manchester United and a Malaysian All-Star XI in Kuala Lumpur.

“I’m a little bit disappointed to be honest ... it makes me feel a little bit sad to see all the empty seats,” said Cesc Fabregas, although Martin Keown doffed his cap to any Londoners who had taken on the 4,970-mile round trip, “they deserve a medal for being here”.

They did too, it being a case of Planes, Trains, Automobiles, Motorbikes, Buses and Trams, as we learnt from the travel diaries of some of them, as shared by BT, their journeys taking them through Riga, Prague, Dubai, Istanbul, Tbilisi and the like, most of them more in need of a health farm by the time they arrived than a football game. Possibly in need of sizeable loans too to cover their costs, but at least they ended up with good views of Uefa royalty in the posh seats after they’d flown in on their private jets. The Football Family, as one in Baku.

“There’s the whole human rights element as well,” said Jake, although Cesc, Martin and Eidur Gudjohnsen weren’t really up for chipping in on that debate, with Cesc putting Henrikh Mkhitaryan’s absence just down to his own personal choice, rather than that whole Armenia v Azerbaijan awkwardness.

The one chink of light Jake could offer was that this was an all-English final, which, along with the Champions League final pairing, suggested that English football was in mighty fine shape. Except then the Chelsea and Arsenal teams were named and out of the 22 starting players, just the one was English (Arsenal’s Ainsley Maitland-Niles). If Gareth Southgate had made the trip, then, he hadn’t much to be looking at.

Over on Virgin Media, Brian Kerr wasn’t enormously surprised that Ross Barkley had failed to make Chelsea’s starting XI, his analysis of the fella’s non-closing-down abilities, in a clip from their quarter-final against Slavia Prague, leading him to conclude that “my mother would have run around to the shops quicker”.

Graeme Souness, meanwhile, was having the mother of all goes at “Sarri-ball” – “absolute tosh!” – reckoning that football is the same as it ever was, it’s just about winning, so Shankly-ball, Stein-ball, Ferguson-ball, Sarri-ball, they’re all the one. Analysts of the current game might beg to differ, but whether they’d be prepared to take Graeme on in a 50-50 challenge on the issue is another matter entirely.

A quick chat with the managers, Sarri looking like he just wanted to be on a beach somewhere, anywhere, Unai Emery buzzing – but Unai would be excited even by Jimmy from Wilthshire Farm Foods turning up on his doorstep with a shepherd’s pie for his freezer.

Opening ceremony time. A big disco on the pitch which BT tried to talk through, their pundits rendered inaudible.

Match time. If you turned your telly up really loud you’d have heard “f** off Uefa, is this what you want” from the fans in the stands, located half a mile from the pitch, although for those perched on couches the more pressing concern was the fact that the camera people couldn’t find the zoom on their machinery, Eden Hazard, for example, already quite a diminutive figure, the size of an atom.

“The match takes place here either side of midnight, local time,” Ian Darke told us, which suggested that Uefa don’t know their time zones, them possibly having been confident that the locals, who had to be early for work on Thursday morning, would fill the seats the Londoners couldn’t afford to occupy, thereby giving the occasion a glossy sheen. So much for that.

The highlight was, possibly, Robbie Savage’s own time zone confusion when Ian told him an hour in to the final that “this game started yesterday”. Robbie fell silent, possibly concluding that Ian was drunk.

“A first half rather befitting of the atmosphere, it’s goalless at half-time,” said Jake at the break. “We want a bit more from this game, don’t we,” he said to Cesc, Martin and Eidur. They nodded. “Come on game, wake up!” And, thanks to Jake’s plea, it did.

It was a goal-fest in the second half, like the two teams were so fearful of putting us through extra time they opted to close down players advancing on goal considerably slower that Brian’s Ma going around to the shops.

Chelsea’s cup. So at least their faithful’s 4,970-mile round trip ended in silverware. No matter how hard they’ll try, though, the poor old Arsenal diehards will never, ever be able to put lipstick on that pig.