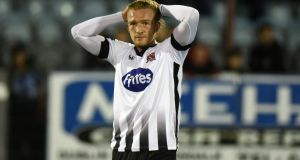 There was late drama at Oriel Park as Derry City came back from two goals down to salvage a point against Dundalk.

Patrick Hoban’s double had the champions on course for a sixth straight win which would have seen them cut the gap on leaders Shamrock Rovers to just one point.

Darren Cole, however, pulled one back before Hoban was sent-off for conceding the 81st-minute penalty that led to substitute Eoghan Stokes snatching an unlikely point for the Candystripes.

Derry looked comfortable in the first half but their only real opening arrived in the 18th minute when Barry McNamee blazed over on the stretch.

Dundalk struggled to piece together anything of note but they showed signs of stirring and Peter Cherrie made two fine saves to deny Michael Duffy before the interval.

Vinny Perth’s side took the lead just six minutes after the restart. Jordan

Flores managed to pick out Hoban with a pass and he made no mistake.

The second arrived on the hour mark when Sean Gannon’s brilliant delivery was met by Hoban and he beat Cherrie with a powerful downward header.

Declan Devine’s men hauled themselves back into it when Cole drilled a ferocious effort into the bottom corner with 79 minutes on the clock and they snatched a point two minutes later.

Referee Robert Hennessy adjudged that Hoban had handled a free-kick, flashing a second yellow card at the Dundalk skipper, and Stokes, who came on just two minutes earlier, rolled home his spot kick.

Following a run of eight games without a win in the top-flight, City held off a late surge from Bohemians to give John Cotter a dream start as caretaker manager.

The hosts offered a considerable threat down the right-flank and a Danny Grant cross was almost deflected home by the outstretched foot of City centre-half Sean McLoughlin.

A Tilley free-kick provided them Cork with the perfect opportunity to get bodies forward, however, and McCarthy was on hand to head home in clinical fashion.

While the Gypsies were somewhat unfortunate to be trailing on the first-quarter mark, City’s reliable netminder Mark McNulty remained largely untested during the opening half. Gearoid Morrissey flashed a long-distance effort past the Bohs goal before being withdrawn through injury on 43 minutes.

Despite also going close through an acrobatic Tilley volley, the visitors were more than content with a one-goal advantage at the break.

They were close to doubling their lead on the resumption when Tilley drew a fine save out of James Talbot. Dan Casey headed a Tilley corner just past the the target on the hour mark and Kevin Devaney was narrowly wide of the mark at the opposite end.

Though there was little doubting their endeavour, Bohs’ lack of cutting edge in attack ultimately saw them losing ground in the title race.

It was a long time coming but after going 15 games without a win, Finn Harps got their first league victory of the season when they beat UCD at Finn Park.

The Donegal side remain bottom of the Premier Division, but the gap to UCD above them is suddenly down to only three points.

Coming on the back of impressive draws at Sligo Rovers and Cork City, this was another impressive display from Ollie Horgan’s side.

They were in front on 18 minutes when Caolan McAleer ran on to a raking pass from Keith Cowan before unleashing a curling effort into the far corner.

UCD, having lost five of their last six games before their trip to the north west, never really kicked into gear and it was Harps who continued to press. Daniel O’Reilly headed against the post and McAleer’s wonderful long range strike came back off the crossbar.

But less than a minute into the second half the home side doubled their lead when John Kavanagh set up Nathan Boyle and the striker fired into the bottom corner.

UCD needed a response but during their best spell of the half, they were caught on the counter-attack when Harps broke after defending a corner on 65 minutes and McAleer finished off a blistering break-away to shoot past Kearns.

Having had their Europa League place given to St Patrick’s amid considerable rancour last month, goals from Ismahil Akinade, Zack Elbouzedi and Aaron Drinan gave Waterford some consolation with the deserved three points at Richmond Park.

St Pat’s shaded a tight opening and would have been ahead but for a stunning save by Waterford keeper Matt Connor from Ian Bermingham 19 minutes in.

Republic of Ireland under-21 international striker Drinan was proving a handful for the home defence, getting the better of Dave Webster only not to be awarded a free kick for what looked a fairly blatant obstruction.

Drinan should then have given his side the lead on the half hour when he did elude the St Pat’s defence only to scuff his shot wide.

That led to Waterford enjoying their best spell of possession in the first half as St Pat’s laboured to regain their early initiative.

Waterford made two changes just before the hour that changed the game as both were involved in their taking the lead on 63 minutes.

Elbouzedi’s ball was cleverly flicked through by Karolis Chvedukas for Akinade who confidently drilled his right-foot shot past Clarke.

Another well-worked move breached the St Pat’s defence six minutes later. This time Cory Galvin threaded Elbouzedi through and the Ireland under-21 winger found the net with a composed finish.

St Pat’s were inches from getting a goal back on 74 minutes. Gary Shaw’s shot was parried by Connor with defender Rory Feely’s attempted clearance hitting a post before being cleared.

Waterford then soaked up St Pat’s late pressure to strike for their third goal on the counter-attack with Drinan finishing well with a low drive on 88 minutes.