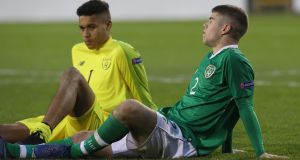 Ireland’s Sean McEvoy and Gavin Bazunu dejected after the game at the Tallaght Stadium. Photograph: PA

It was a disappointing opening day for both the competing team and Ireland, the hosts and organisers at these Under-17 European Championships.

Here in Tallaght a second half goal from Matt Everitt looked to have taken Colin O’Brien’s young side a significant step closer to the knock out stages. Then, with the very last kick of the game Dimitris Arsenidis grabbed a Greek equaliser that dismayed the Ireland manager and his players.

The evening’s other game, between England and France, meanwhile, had to be put back by half an hour after the driver meant to get the Slovenian referee and his fellow match officials from Dublin to Longford, took what was officially described as “a wrong turn” and brought them to Athlone instead.

So, the tournament’s transportation crew presumably get to spend the weekend revising their list of official venues and relevant routes while the Irish team get to work on mapping out a tougher path to the quarter-finals than the one that seemed to be opening up before them for 32 minutes here.

With four and a half of five added minutes played, they were on the verge of victory and though Sean McEvoy’s error played Arsenidis in for the late equaliser, the Irish players protested at length after the final whistle sounded; adamant, it seemed, that there had been a flag moments before the goal for an earlier offside.

“It’s a blow,” acknowledged O’Brien, “but it’s the first game of the tournament and generally these groups go to the third round of games. After the way the other game turned out, everyone has one point so we get the lads back to the hotel tonight and we look to (the Czech Republic in) Waterford on Monday.”

Asked about the goal, he said that the referee had made it clear to him that as McEvoy’s intervention had been deliberate, the scorer was played onside.

“He was offside when the ball dropped into the box,” he said, “but the referee said that as the action was intended, he was onside in the second part of the play. What I had initially thought was that maybe the ball had just come off him.”

The pity was, he suggested, that Ireland had deserved to win the game. They had certainly controlled most of the early exchanges and created a succession of clear cut chances to take the lead. Charlie McCann’s shot was a little high, though, Everitt’s first a little wide while Timi Sobowale failed to get the required connection on what looked the perfect cross from Andrew Omobamidele to the far post.

The Greeks survived and gradually got themselves into it with the locals lucky to stay level when Vasilis Grosdis volleyed over from space and in front when Vasilis Sourlis failed to turn the ball into a near open goal not long after Everitt had given Ireland the lead from a James Furlong that wasn’t properly cleared.

Both sides had chances after that but Ireland had the better of them, at least until those dying seconds.

The result in the day’s other Group A game was something of a surprise with Belgium having been expected to win. Instead, they had to salvage a draw late on against the Czechs after losing one player to injury and another to a red card.