Cillian Sheridan moves down under with Wellington Phoenix 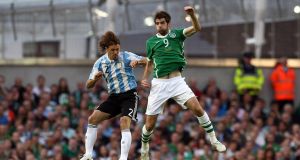 Cillian Sheridan during his third and final Ireland appearance, against Argentina in 2010. Photograph: Dan Sheridan/Inpho

More than a decade after passing on the opportunity to move down under in order to play Aussie Rules, much travelled Irish striker Cillian Sheridan has arrived in the A-League after leaving Polish side Jagiellonia Bialystok to join Wellington Phoenix.

The one time Celtic striker, who has signed until the end of the season, has been training at the club over the last few days and, assuming his international clearance goes through in time, he will go straight into the squad for the game away to Adelaide United which kicks off a run of six matches in just 18 days for the New Zealand outfit.

“We needed depth all over the park but certainly up front is an area that we identified,” said “Nix” manager Mark Rudan as the player was unveiled to the local media. “He’s a big fella and not only can he hold the ball up but he has a really good touch, he moved extremely quickly, he’s one of the quickest guys in the team where he has been.

“It’s always hard to bring in players at this time of year but we’ve got one of real quality I believe. He’s 29; a fantastic age. He’s won things; he’s played Champions League football, he’s got himself out of his comfort zone; he could have stayed in the UK and had a really good career but he’s gone to places like Bulgaria, Cyprus and Poland and everywhere he has been he has won.

“He’s been playing which is important; I got a lot of players across my desk who hadn’t been playing but he came off the bench in his last game in Poland and prior to that played three 90 minute games. He’s looking fit, he’s looking sharp and I believe we’ve got a fantastic player.”

Sheridan laughed off the bit about getting out of his comfort zone, suggesting that Wellington didn’t feel like too great a challenge; something that brought a good natured rebuke from his new manager, but the move represents another major leap of faith for a player who has routinely backed his own ability to make an impact in what are, for an Irish player, pretty unlikely places.

Having left Cavan, where he played both gaelic football (which earned him the offer of a move to Brisbane and change of codes) and soccer, he initially made significant progress for Celtic before failing to nail down a regular starting spot in the first team. He then followed the well-trodden path of loan moves to clubs in England and Scotland before opting, in 2010, to sign for CSKA Sofia where he helped the club to the Bulgarian Cup in his first season.

He returned to Scotland for a spell before joining Apoel in Cyprus where he won back-to-back league and cup doubles and earned much affection amongst the local supporters with the key goals he scored in the last league game and cup final of the 2014 campaign.

After a stint at another Cypriot side, Omonia, he move to Poland and has, along the way, probably played more European football than any other Irish player, certainly more than any in the group stage of the Champions League.

Despite that, he has only ever made three senior appearances for Ireland, all of which came way back in 2010 and Martin O’Neill never showed any real interest in him. When the northerner departed recently, Sheridan, who engages a good deal with social media and produces a podcast on a fairly regular basis, tweeted: “As an Irish fan, I’d love the FAI to go all out for Chris Hughton. But as a player trying to get into the squad, I’d love if they gave it to my Dad.”

The offer of a move to New Zealand, he says, came as a surprise: “I got the phone call out of the blue and didn’t immediately get my head around it but after talking to the manager I very quickly came around.