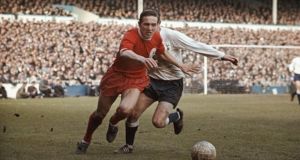 Peter Thompson of Liverpool in action during a match against Tottenham Hotspur at White Hart Lane in 1968. Photograph: Getty Images

The former Liverpool and England midfielder Peter Thompson has died at the age of 76.

The left-winger won two league titles with Liverpool under Bill Shankly as well as the club’s first FA Cup, in 1965, scoring 54 goals in 416 appearances. He also helped Shankly’s formidable team of the 60s reach the European Cup Winners’ Cup final in 1966.

Thompson, who was born in Carlisle, began his career at Preston as a callow 17-year-old but impressed Shankly enough for the Liverpool manager to spend £37,000 on the the then 20-year-old in 1963.

Thompson was a modern winger for the time, preferring to cut in from the left on his right foot, which often confused opposition defenders. Shankly rated him among one of the best players he ever managed. “I have no hesitation in placing Peter up among the all-time greats – alongside such players as Tom Finney, Stanley Matthews and George Best,” Shankly wrote in the programme for Thompson’s testimonial. “They say he didn’t score enough goals, they said his final pass wasn’t telling enough. Well, if he had scored goals as well as everything else he did, he would have been in the same category as Jesus Christ!”

Ian Callaghan, his former teammate, echoed Shankly’s sentiments: “He had a real gift for dribbling with the ball and holding on to it. Peter was a really special player, he really was,” he told the Liverpool Echo. “He was signed from Preston early on in the Shanks era and was there right into the early Seventies. We played with two wingers with Peter on the left and me on the right. We had a wonderful time together.”

Thompson played 16 times for England but was not a part of the World Cup squads of 1966 and 1970, despite having been named in the initial 28-name squads for both tournaments.

Thompson left Liverpool for Bolton in 1973, where he played over 100 games for Wanderers before retiring in 1978. – Guardian service