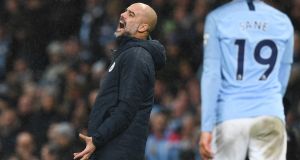 It’s the most wonderful time of the year. Or rather, it is if you take your lead from a chortling, bearded man who has spent most of the last month dispensing his own kind of giddy, red-suited festive cheer.

At the start of December Jürgen Klopp could be seen haring across the Anfield pitch, skipping and leaping and making a strange yanking gesture with his arms, like a man repeatedly puncturing an inflatable lilo with a breadknife while being pursued by a swarm of angry jack russells.

Except not this time. Enter Jürgen’s festive miracle, a period of four weeks, six matches (plus six minutes of added time at Anfield) during which Liverpool have gone from four points behind City to seven points clear at the top.

It is a remarkable surge of cold, hard sporting will, eight wins in a row in all competitions, with 23 goals scored and three conceded. In its shadow City have stuttered and stumbled. To such a degree that ahead of Thursday night’s brilliantly-timed meeting between the two it is the blue half of this table-topping syzygy that seems arguably the more fascinating right now.

When City travelled to Anfield in October the match was billed by Sky Sports’ endlessly salivating marketing arm as “Champions versus Challengers”. Such is Liverpool’s momentum it is City who must now chase and apply pressure, Guardiola who must try to do something different, and indeed unprecedented, in his own coaching career.

Winning ugly, taking a title with a stumble along the way: this is something no Pep team have done before. “We are so close!” Guardiola can be heard yelling at his players during the in-house hagiography of the title-winning season. But it was never really close. City simply ran away from the field, playing with such frictionless brilliance that as recently as this November there was already talk of a kind of ultimacy, of the greatest team of the past 25 years, the last century, perhaps the century to come.

Instead of which Guardiola’s team must now come from behind. At Barcelona, Bayern Munich and City Guardiola, has won seven league titles in nine seasons, but his champion teams have all run from the front, bending the race to their own will from the gun. The closest to a messy league title win is probably the second one at Barcelona, which went to the final day of the season. But even then Barça just kept on running ahead of the tide, never stumbling, racking up 99 points in the process.

In those two seasons without a title both Pep-built teams – Barcelona in his last season, City in his first – have malfunctioned long before the season’s end, both times accompanied by an element of flounce, of conceding the scrap with high-minded grace. Victory is yet to come on more pragmatic terms. This would be an excellent time to start, and not just for the sake of the Premier League season.

It is always tempting to look for flaws in a team that has presented itself as close to sporting perfection. The chief snark directed at this City team is that it excels above all in putting away the mid-rankers. Victory on Thursday night might wrench the initiative back from Liverpool. But it would also be the first time City have beaten a team ahead of them in the league since Arsenal in December 2016.

The strongest opponents City faced in 2018 were Liverpool, Chelsea, Manchester United, Tottenham and Lyon. Against these teams their record reads played 12, won four, lost six. This is, of course, unsurprising. The stronger teams are, believe it or not, a little harder to beat. But there is also a tactical and textural dimension to this.

City’s system is built without compromise, is above all optimistic, geared always towards producing the perfect game, colouring the entire world sky blue for 90 minutes. Often this involves scoring early and simply streaking away from there, a microcosm of those title-winning seasons.

Which is fine when it works, as it does most times. But City also haven’t come from behind to win a league game since West Ham at home last season. More recently against Crystal Palace and Chelsea going behind has seemed to spook the whole system, not least because successive opponents have pressed at the same weakness.

Chelsea at the start of December showed how to surge in behind City’s full-backs when they press high and fail to track back urgently enough, or miss the right kind of cover from midfield. Several times at Stamford Bridge, a long flat diagonal pass out of defence found wide open green spaces behind the blue shirts. Palace did the same down the right a fortnight later. Last week Jamie Vardy and Marc Albrighton went scampering in down the left at the King Power Stadium.

It is Guardiola’s love of overloads, of fearlessly stretching the pitch, that Lyon first managed to exploit in the Champions League, something better opponents than Schalke will also pick away at in the late stages of that competition.

Andrés Iniesta pointed out this week that City really should come close to winning the Champions League given the investment made and the calibre of coach in charge. To do so, and indeed to make a mark on Klopp’s December surge, might require something different to what we’ve seen, the willingness to adapt and protect a weakness, to clench a scented handkerchief to the nose and deign to win ugly now and then.

At the Etihad, City will face a Liverpool team with more varied ways of playing, greater physical strength, and an attack perfectly equipped to prey on that brittleness on the flanks. How they respond could decide Guardiola’s own ultimate success at a club that has shaped itself entirely to that uncompromising ideologue’s style.