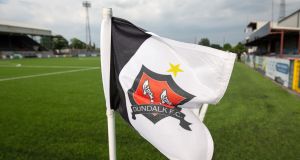 League of Ireland champions Dundalk have confirmed that Mal Brannigan, the CEO brought in from England by the club’s new owners last year, is to depart, with an official statement issued late on Thursday evening suggesting he is leaving “to pursue other opportunities”.

There is no firm news yet on the imminent involvement at Oriel Park of Andy Burton, the former Sky reporter and commentator, although it does seem that the one-time Capital Radio DJ is to have a role at the club despite a couple of local news outlets having to backtrack on reports that he would be handed the title “Head of Recruitment”.

Burton spent 12 years at Sky but was suspended for a time by the broadcaster in 2011 as a result of sexist comments, made that January, about female assistant referee Sian Massey in an off-air exchange with Andy Gray and Richard Keys. The presenter and analyst left high-profile positions at the company as a result of the incident, but Burton returned to his role before eventually departing in December 2017.

For the past two-and-a-half years he has been working with Bournemouth FC as a “Senior Recruitment Consultant.” It is understood this role there is to be expanded so as to include some work along similar lines for Dundalk, where a reorganisation appears to be underway in the wake of Stephen Kenny’s departure and the appointment of Vinny Perth as his successor.

Perth was adamant this week that he and the rest of the management team - John Gill and Ruaidhri Higgins - would retain complete control over who came to the club but acknowledged that the club’s owners, mainly the Chicago based American investment firm Peak6, were looking to avail of the expertise at Bournemouth in which they also hold a significant stake.

Burton’s role there is said to consist of compiling background and personality reports on players identified by the club’s scouting and coaching staff as potential recruits. Speaking after his appointment had been confirmed, Perth said he was onboard with the owners’ proposals and Burton is believed to have already spent time at Oriel Park where discussions took place regarding his role with the club.

Brannigan’s departure meanwhile, while not appearing to come as a huge surprise locally is, on the face of it, slightly at odds slightly with the stated desire of the American owners for continuity in the wake of last season’s tremendous on-field success. The club had already been forced to appoint a new manager as a result of Kenny moving on and that process was complicated by the need to circumvent the FAI’s stipulation that only Pro Licence holders are qualified for the position.

Perth doesn’t have one, but with FAI licensing there is always a way and so Gill has come in to share the workload and coaching titles.

The developments at Dundalk come amid suggestions that Celtic are about to take a significant stake in Shamrock Rovers. It is understood, though, that that story has its roots in very early stage contacts about the possibility of Dermot Desmond - the Bhoys’ main shareholder - becoming personally involved with the Dublin club, something that apparently remains a long way from being agreed with him.

In the event it eventually is, there would have to be agreement on any change of existing club structures between Rovers’ current owners - Australian based Irish businessman Ray Wilson - and the supporters.

The independence of the club, in any case, appears not to be an issue. Celtic, contrary to reports, apparently have no direct part in the proposal.

The idea floated in the original story - that Celtic would have had first refusal on Rovers young players while the League of Ireland outfit would have access to Celtic ones on loan - would have fitted rather neatly into the trend for cross border partnerships or ownerships, something one of Dundalk’s owners, Jordan Gardner, spoke to American journalist Grant Wahl about this week on the podcast Planet Futbol.

Gardner said that he and a number of unnamed partners are currently working towards the purchase of a Danish club, to which they could send young American players with a view to selling them on to bigger European clubs. He described the purchase of Dundalk in late 2017 as “more of a European play”.

“People I talked to asked: ‘Why would you buy a club in Ireland? The league is not strong and most of the best players in Ireland get poached by the best clubs in the United Kingdom’. But when I step them through the business model and say: ‘Look, this is a really interesting club, it was in the Europa League group stages in 2016, there is a lot of financial upside to being in European competition, it’s a very modest club so there is a lot of financial upside there.’

“When people hear that, they are like: ‘Oh, that’s super interesting. Why didn’t I think of that?’”